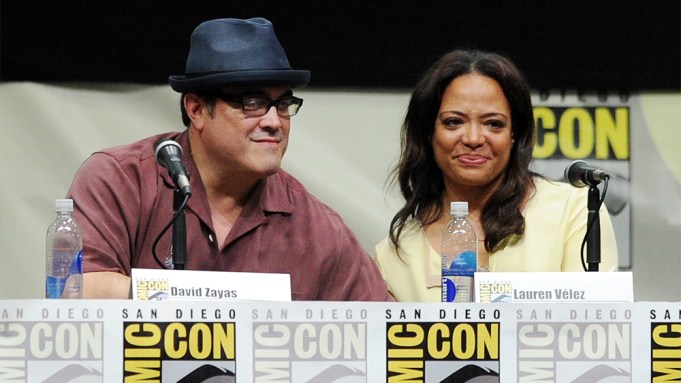 Dexter Morgan just upgraded to his largest kill room yet.

The super-sized panel and fans used the majority of the time to reflect upon what they’ve loved about the series, and how the actors and writers have dealt with the themes of death, morality, and identity for the show’s eight successful years. It was a very sentimental end to the life of a series whose main character ends lives with a complete absence of sentimentality.

“It hasn’t hit any of us that it’s over. We’re still sort of frozen,” explained Executive producer Sara Colleton when asked by Garman what it’s like to take the series from beginning to end.

Star Michael C. Hall added that “Our conscious minds are aware that it’s over…I think there’s an unconscious part of us that hasn’t recognized it yet.”

Garman also pressed the actors on how they’ve related to their characters on screen and off over the course of “Dexter’s” eight seasons.

“I feel like a stunt car driver…It’s been scary and complicated, and I appreciate the challenge,” described Jennifer Carpenter, whose character, Debra Morgan, has been put through the ringer this season after finding out at the end of the sixth season that her brother was a serial killer.

“Not a day goes by that somebody doesn’t recognize me as a psychopath. I have you to thank for that,” actor John Lithgow, who played the Trinity Killer in season four, dryly said to the fans via video message.

When it came to the current season, there were obvious questions that the panelists weren’t going to answer. At least not intentionally.

After saying she could say what Hannah’s involvement is with this season, the actress slipped, “I’m coming back…We don’t know if her revenge…” And with that, a noticeable flub was caught by the audience, whereupon she attempted to regroup and say “We don’t know if her motivation is revenge or love.” Whether or not her initial comment potentially spoiled Hannah McKay’s purpose on the show has yet to be seen. “I’m just gonna hide,” Strahovski said in the end.

Colleton described the addition of Charlotte Rampling as “kismet,” saying that she was the first person they wanted, and that circumstances aligned perfectly for her to take the part of Dexter’s mysterious mother figure this season.

Given that one of the show’s major themes is death, the actors were asked what they bring to the scenes where they know they’re going to wind up one of Dexter’s victims.

“I couldn’t wait to do it… I wanted to be in it as much as I could,” described actress Lauren Velez of her character’s demise at the end of season seven. “I wasn’t surprised, but I wasn’t prepared for how I would feel.”

“When you have someone who shows up fully with his heart and his craft, you want to do your best,” complimented Erik King of Michael C. Hall’s stalwart work ethic.

Colleton explained that at a certain point, it becomes inevitable that a character has to die on the show, but that it’s “like a death in the family.”

But just because major portions of the panel focused on all things dead didn’t mean it was completely devoid of laughs.

At one point, Desmond Harrington recognized that his character was “a mess” due to his drinking, ineptitude with relationships, and inability to get along with his partners. In the “Dexter” universe, characters like him don’t last very long, but for some odd reason, Det. Quinn has endured. It was noted that he even survived being Deb’s boyfriend which Garman likened to wearing a red shirt on “Star Trek.”

And when one fan asked what Michael C. Hall would do to relieve stress after “Dexter” is over, Hall said that he would do everything that his character would do, but just add tickling.

In the end, Garman asked the entire panel if they had any final words for the fans.

“It’s nice to be reminded who we’re doing this for,” said Scott Buck.

Laura Velez gently thanked the audience and was moved to tears.

“You guys have kept me alive for the past six years,” joked Erik King before thanking the fans.

“The most authentic thing is our relationship to you…We want to do right by you…It’s a wrap with you all now,” Jennifer Carpenter gushed.

And finally, star Michael C.Hall, visibly moved by the event, said “We have been here for you and we’re all here because of you,” before thanking everyone, representing his final farewell to Comic-Con as the infamous blood patter analyst.

The panel ended with the entire hall rising to its feet for a standing ovation to say goodbye.

Despite Dexter’s morally dubious exploits, even Harry would be proud.