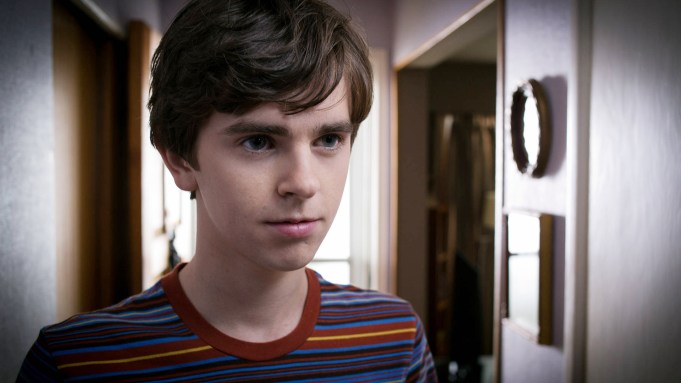 The producers and cast of “Bates Motel” checked into Comic-Con on Saturday morning to shower fans with information about their unique take on the “Psycho” mythology on A&E’s new hit series.

ALSO AT COMIC-CON: Superman and Batman to Team Up in Movie

Snierson initially explained that Highmore wouldn’t be in attendance to the crowd’s dismay, but after some teasing about the reason for his absence, Cuse showed a special video to provide an explanation: The crowd is led to believe that Highmore killed a man at the Bates Motel set at Universal Studios for “stealing his thunder” and was caught dumping the body in the trunk of a tram full of tourists.

Just kidding. Highmore then entered the room and joined the rest of the panel.

Much of the discussion focused on to what extent Cuse and Ehrin are sticking to the characters, relationships, and backstories of the original “Psycho” film franchise.

Ehrin claimed that while they’re attempting something original, there are certain elements that have to remain unchanged.

“One is the progression of Norman Bates losing it, and the other one is the house,” Ehrin explained.

Cuse added that “By taking these iconic characters and putting them in a modern setting,” it allowed them to tell their own story.

Cuse added later in the panel that doing direct homages to the original material “throws you out of the story that you’re telling… You’re immediately dislodged” from the new story that they’re trying to tell.

““It’s not going to end well, but the path is super fun,” Cuse added, referencing the creepy and tragic backstory of Norman Bates.

The show also allows Cuse and Ehrin to explore the unusually close nature of Norma and Norman’s relationship.

“She’s incredibly flawed, yes, she comes with a very warped history and a lot of pain that she’s damming up,” Farmiga explained. “In her defense, she is the mother of a child with mental issues, and there’s no way that a parent can say that their child has a mental illness without their spirit imploding.”

“Norma is very needy … She doesn’t always see what she’s doing,” Ehrin elaborated at one point after Highmore described the nature of the mother-son relationship as “dodgy.”

One liberty that the show has taken from the original material is the addition of a half-brother for Norman named Dylan, played by Max Thieriot.

Snierson asked Thieriot if he was rooting for a romance with the character Bradley (Nicola Peltz), to which he responded, “I’m rooting for whatever keeps me alive at this point.” He added that while he’d like to see it explored, he’s also nervous about the implications for the future of his character should it occur.

Cuse added that giving Norman a brother allowed them to have a character that was “looking in from the outside” to provide the audience with a different perspective.

As the panel progressed, teases and hints for what fans could expect in season two were gradually divulged.

“There’s a new romance for Norman and Norma this year … And not with each other, okay? Not yet,” Cuse joked.

In response to an audience member question regarding whether the actors ever pitch storylines they’d like to see for their characters, Cuse said that one of Farmiga’s suggestions was being woven into the second episode of the next season. When asked by Snierson for a one-word hint for what it would involve, Cuse cryptically responded with “Sandman.”

Another audience member asked how far they intend to take the series into Norman’s adulthood, to which Cuse responded, “I don’t think we’re doing 14 years of Bates Motel,” but that he and Ehrin should have a better idea by the end of the next season.

In regards to whether Norma and Norman will murder together again, Cuse and Ehrin are undecided.

“You don’t plan out storytelling that way,” Ehrin explained.

Fans will have to tune in to the next season of “Bates Motel” to get more details about what Snierson called ” an innocent love story between mother and son.”

No premiere date has been set for the new season, but it is confirmed to return in 2014.