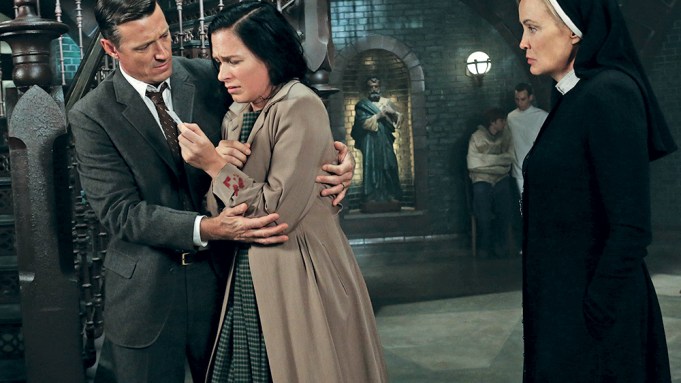 Steven Soderbergh, Jane Campion, Olivier Assayas, Lena Dunham, Agnieszka Holland and Ray McKinnon are all filmmakers who owe their careers to early film festival support, and it comes as no surprise that all of them have had their most recent productions play at the world’s top fests. Yet unlike the glut of filmmakers hustling to tie up distribution deals at festivals, all of their works screened with distribution already in place — on television.

As the lines between television and film continue to blur, film festivals have become an increasingly reliable venue for TV movies and series. Soderbergh’s “Behind the Candelabra” had a showcase premiere at this year’s Cannes fest before bowing on HBO, and Campion’s “Top of the Lake” became the first TV miniseries to screen at Sundance last spring. Dunham’s HBO series “Girls” preemed at South by Southwest in 2012, paving the way for A&E’s “Bates Motel” to sneak a screening there this year, and the first three episodes of McKinnon’s Sundance Channel skein “Rectify” screened at Park City in January. The Rotterdam Film Festival introduced a TV-centric sidebar program this spring, dubbed Changing Channels, which hosted the bow of Holland’s HBO Europe mini “Burning Bush.” Four years ago, the Deauville festival added a TV sidebar, featuring such HBO shows as “The Newsroom” and “Girls,” and this year the pay cabler’s “Behind the Candelabra” opens the U.S.-centric French fest.

“I was in the audience at Sundance and that was very exciting for me as people not only stayed, but were very emotional and expressive,” Campion recalls. “There was a bonding process about getting through such a big viewing experience.”

Of course, there have always been intersections between the two worlds, particularly in Europe, where top helmers have long dabbled in longform television.
But the obvious trendsetter for the modern mini invasion was Assayas’ nearly six-hour 2010 opus “Carlos,” which unspooled at Cannes before its Stateside bow on Sundance Channel. Adored by critics, it became an awards darling.

Yet one breakthrough isn’t enough to change long-standing tradition. Though television has made enormous strides luring topnotch film talent into its clutches over the past decade, the trappings of cinematic release can be hard to shake.

As Sundance Channel prez Sarah Barnett says: “There’s still something incredibly affirming and exciting about being at a festival. Especially for people who have been in film their entire lives, it’s part of the rhythm of critical acceptance.”

HBO declined to be interviewed for this piece. Yet in recent years the premium cabler has screened more of its original programming at fests than any other network, and if it truly doesn’t have a fest strategy, it does at least seem to have found a bit of a good luck charm.

Though the Sundance Channel does not disclose viewership figures, Barnett says “Top of the Lake” “really built up a good head of steam” on the back of strong critical notices out of Sundance, gaining further momentum with an appearance at Berlin. Continuing series “Rectify” was picked up for a second season only three episodes into its first season run.

Of course, there’s a darker view on all this tube-fest commingling as well.

As Inge de Leeuw, who spearheaded Rotterdam’s Changing Channels programming, says: “In former times, few leading filmmakers worked successfully in both media. … (Now) there is a movement in the opposite direction at the major American film studios: less and less interest in original scripts and idiosyncratic drama.”