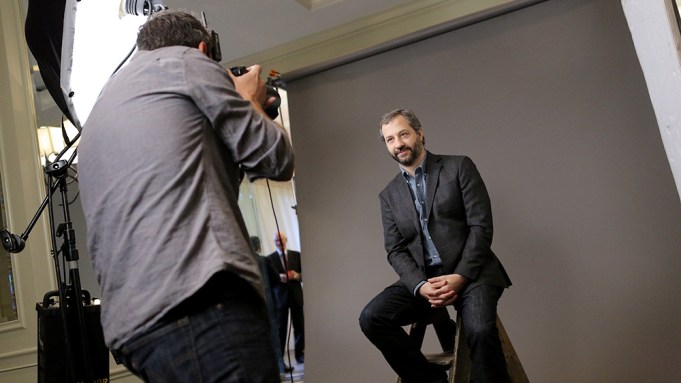 I am coming to you live from the Variety Emmy Elite Showrunners Breakfast at the Four Seasons Beverly Hills. I’ll be posting the best quotes from the interviews with the Emmy-nominated drama and comedy executive producers, so enjoy!

First up will be the Emmy drama panel, featuring Julian Fellowes of “Downton Abbey,” Vince Gilligan of “Breaking Bad,” Matthew Weiner of “Mad Men” and Beau Willimon of “House of Cards.”

Fellowes: “I think people always obsessed (over TV). The different thing is they didn’t have an outlet for it. … They say, ‘He would never done that,’ and I’m, ‘I invented him – he does what I say.'”

Gilligan: “It is more emotionally wise for me to steer clear from the admittedly amazingly wonderful reactions (online) … because it seems to me to be human nature is that you can have a thousand good things said about you, but all you remember are the one or two or 10 bad things.”

Fellowes: “When you kill a character, blimey! Then you know what it’s like to be accused of being a serial killer. It’s unbelievable.”

Weiner: “You want them to be obsessed. I personally have sworn off it – I’m a former addict, but it was personally destructive for me. … If they see something they like, they will ask for (more) of it, but if you give them more, they’ll say it’s boring.”

Willimon: “It’s the old Woody Allen quote, though he probably stole it from someone. ‘When it’s bad, it hurts, and when it’s good, it’s never good enough.'”

Weiner: “I was talking about trying to watch all the ‘Mad Men’ (episodes) before going into the final season, but it’s 78 hours. I could take a vacation, or I could watch the show. … Something like ‘The Wire,’ just in hindsight – it didn’t have that individual episode thing. You didn’t really have chapters, you just had one long story.

“There was a time serialized drama was being phased out because the syndication model didn’t support it. … Anything that encourages people to get caught up or live in the world of the show is very good for the show.”

Willimon: “I’d like to dispense with the idea of episodes altogether. Just have 13 hours, and the audience chooses when it wants to stop and start again. … I think as the technology (changes) over the next five years, you’ll see (the definition of an episode change).”

Fellowes: “I think the problem of concentrating on the idea of someone watching six episodes at a time is that when you break it into six chunks, there’s always the danger that it won’t quite work.”

“We always have too much show, and I’m always cutting it down. But we never have enough for two. When we do two-parts on ‘Mad Men,’ it’s always three episodes cut down to two.”

“One of the things about ‘The Sopranos’ is that it was so organic. David (Chase) had been working in television of 30 years, and he was always playing against what was expected.”

Fellowes: “That’s the way modern TV works. You come up with all this stuff, you jam it all together, and you end up with a bowl of electric cream.”

Gilligan: “No white boards. I hate white boards. I have a pet peeve about them. With a dry-erase white board, if you’re playing Nerf football and someone goes long and you mash your shoulder against one, you lose all that work you did that week. Cork boards are much more durable. … That’s literally all I have to say.”

Gilligan: “I’ve definitely had that experience: You talk about something for many many months on end, and you feel like you’ve done it already.”

Fellowes: “I don’t have as much ability to talk in our writers’ room because there’s only one person in our room: me.”

Weiner: “I didn’t say anyone else talks.”

Fellowes: “There are no boards. ‘In this episode, Mrs. Pattmore falls in love.’ That’s it.”

Gilligan: “A lot of people have found it very annoying that we broke them up eight and eight, and sort of put the blame on the network and the studio. The truth is, that was my fault, because it takes a long time to break these episodes. They take about three weeks, sometimes four weeks, just to break them. That’s not the writing – just to structure them. … That is the least fun part of the job and also the hardest part of the job, and also the most important part of the job. We knew mathematically we didn’t have time to have all 16 figured out.”

Gilligan: “I probably had ideas about where it was going to go, but I forget so much. I’m not joking. … It was replaced by better ideas (through the room).”

Fellowes: “The show changes you … the whole thing is very organic. I don’t think at the very beginning you should know where it’s going to go. Toward the end you sort of know who’s going to be happy and who’s going to get it in the neck, but that’s about it.”