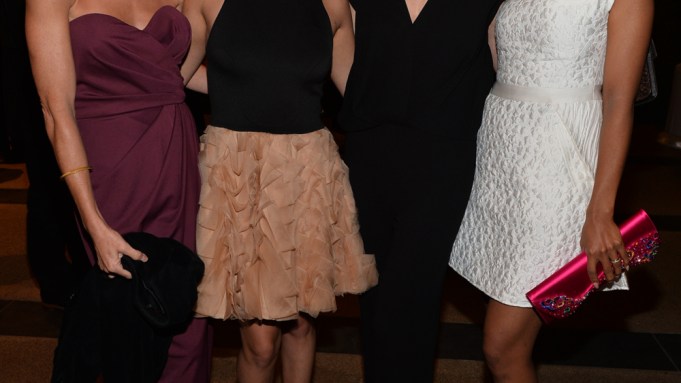 By this time, those of us on the circuit had seen one another four or five times during the last 36 hours, so we dispensed with the small talk and got right down to the nitty-gritty of who’s gonna win, who should win, and why it would be criminal if this person or that show doesn’t win.

But who knows? Momentum means nothing until that envelope is opened, which is why “Get Lucky” was a fitting theme song last night at bashes thrown by NBCUniversal, Showtime and the Motion Picture Television Fund fundraiser.

As usual, the hostess with the mostest was the Evening Before bash held on the Lawn at Century City to support the MPTF. It’s easier to list who wasn’t there. (EXCLUSIVE photo gallery)

CBS’ Leslie Moonves and Julie Chen drew quite a hive around them, between people wanting to schmooze Les and people wanting “Big Brother” gossip from Julie. Moonves finally had to tug Chen away from the main drag to a table lest his mini hamburger get stone cold.

Warner Bros.’ Kevin Tsujihara made the rounds (and generously inquired about how many parties this reporter is obligated to attend).

Chuck Lorre and Co. were out in force. “Big Bang Theory'” maestro Steven Molaro is not the type to beat his chest but others were ready to do it for him regarding the show’s 20 million viewer milestones last season. (No pressure, of course, what with the seventh season preem on Thursday.)

A+E Networks’ Nancy Dubuc summoned a Studio 54-ish vibe with a silky white pantsuit that she pulled off incredibly well. Kerry Washington had the Gladiator glow in a simple white sheath that nonetheless stopped traffic. Connie Britton and Michelle Dockery also turned heads, as usual. Allison Janney was sleek in a tight blue-beaded number accented by her long locks.

Showtime’s gathering at the Sunset Tower was a treat for “Homeland” fans who got to see a very pregnant Morena Baccarin (due date is about a month away) and a very bald Damian Lewis. Yes, the chrome-dome cut for Brody has been done for the show but Showtime’s David Nevins and Matt Blank wouldn’t say any more — need to know clearance level, of course.

The highlight of the affair was a three-song set by Rufus Wainwright, which turned into a four songs when Mandy Patinkin requested “Cigarettes and Chocolate Milk.” He pulled out his stage voice to quiet down the room. And let’s just say nobody messes with Saul. Wainwright also did a heartfelt “Hallelujah” that undoubtedly made Leonard Cohen proud.

The night’s rounds began about 5 p.m. at Boa Steakhouse on Sunset where NBCU served up filet mignon and sushi rolls. Guests had fun with a few photo booths spread around the restaurant. NBC Entertainment topper Bob Greenblatt continued to receive good wishes for the four-year contract extension that was disclosed on Friday. None were happier for the boss than NBC staffers who expressed relief that the net will finally have something it’s been starved of since the late 1990s — consistency at the top.

(Pictured above, Kevin Tsujihara, Peter Roth and Jeffrey Katzenberg at Evening Before)