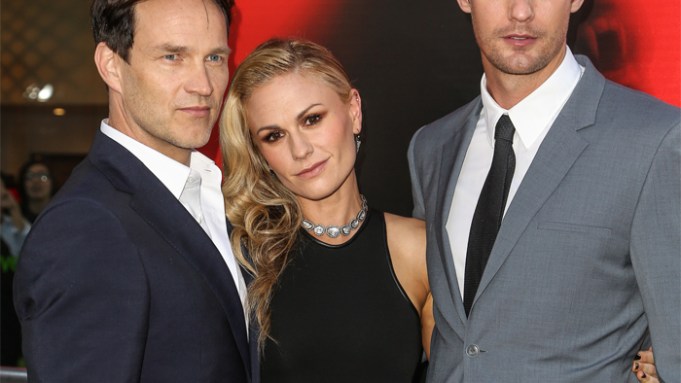 It was all about fangs June 11 as the veteran actors of “True Blood” talked about teaching the series’ new actors how to adapt to vampire life. HBO celebrated the season six premiere at Hollywood’s Cinerama Dome, where Deborah Ann Woll, among other thesps, gave a lesson on being an expert in the vamp department.

“When new people come on, there are all these little things I forget about like showing your fangs, how to bite someone,” she said. “But part of the fun of it is that each vampire gets to do things their own way. So it’s been fun working with the new ones and trying different things.”

Rutina Wesley has her own assessment for the newbies: “I taught them how to talk with fangs and act like they aren’t there. The true test is saying ‘Sookie Stackhouse,’ because Anna made me do that and she said if I could, then I’d be good.”

Lucy Griffiths was told, “I needed to have a growl when my teeth came out and to make it convincing.”

Woll reminds them, though, to beware: “The pointy teeth sometimes leave little cuts on the inside of my mouth. After a long day of that, I’m ready to take them out.”

Chris Bauer has been on the show since the beginning and has his own tactic when it comes to welcoming new actors to the set: “I’m more of the scared straight sort of method where I like to maintain my distance and stare and make people feel like I’m watching them so that they really bring their best game. If I don’t freak somebody out too much, I will have long supportive, encouraging conversations with anyone.”

Newcomer Rob Kazinsky appreciates the encouragement, as the premiere was his first red carpet event.

“It’s all new to me,” he said. “You bust a nut to get a job and be successful and then suddenly you’re here and you’re on a big show and all these people are around that you’ve watched on TV and you go, ‘Wait, hold on, no way. This is real.’ ”