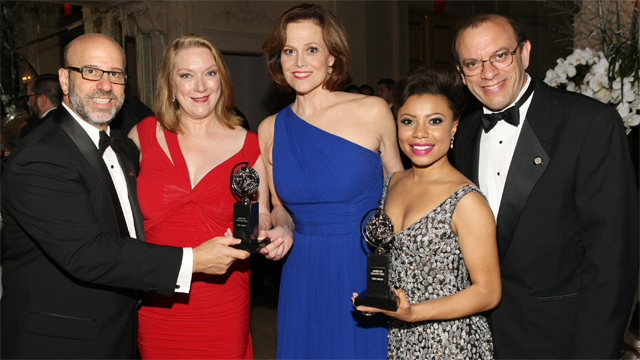 The Plaza Hotel turned into a hive of Tony Awards congregants June 9 following the Radio City Music Hall ceremony. As the black-tie crowd crowded the bars and food stations, everyone agreed it was a great show with a great host, Neil Patrick Harris.

“It was hard to watch the show, I was trying to stay grounded,” said Tony winner Andrea Martin. “But that opening number was one of the best I’ve ever seen.”

“Neil Patrick Harris was a talent monster tonight,” proclaimed Zachary Quinto. “So we were backstage during the opening number, and I’m sure it was as thrilling as it was to be in the audience.” Asked if he knew how Harris managed to walk into the onstage closet and then pop up far away in the Radio City aisle, Quinto replied, “Yes, we talked about it, but I can’t divulge another magician’s secret.”

“Some of the best writing they’ve had in a long time,” said Judith Ivey, who “loved the tongue-in-cheek skit about all the actors who went off to do TV,” including Megan Hilty, Andrew Rannells and Laura Benanti — and then had their series canceled.

“That skit was hilarious and smart and playful,” said Debra Messing.

“It was inside,” opined Patricia Clarkson, “but funny enough to translate.”

“TV has been a very exciting world to get to play in the last couple of years. I’m happy to have done both of them,” said Rannells, who films a new episode of HBO’s “Girls” June 10. “But the theater will always be home to me.”

Tony winner Tracy Letts said of his win, “I just felt like anybody could win and nothing would have surprised me. I wish we could do it differently somehow. Have us all get up onstage together and take a bow and leave together as opposed to picking one guy.”

What did Letts mean exactly when he said onstage, “We’re the ones who say it to their faces”?

“I meant our art form involves interaction face to face, with human beings. We don’t get to hide behind lights or cameras or CGI, so I believe we have unique responsibilities because of that,” he explained.
Letts’ previous Tony was for writing “August: Osage County,” now an upcoming movie with Meryl Streep and Julia Roberts.

“I have seen it, it’s terrific. It’s not going to be three hours long,” Letts said, referring to the play’s length. “It’s over two, it’s a very different experience than the play.”

Letts has been busy: “I’ve just written a new play and I don’t know what the plan is there yet and I’ve just joined the cast of ‘Homeland,’ as a senator who’s kicking some ass.”

As for where he feels most at home, acting or writing, Letts noted, “They’re very different, they’re both really hard. My friend Amy Morton refers to doing multiple disciplines as ‘crop rotation.’ I think that’s true, it keeps it fresh.”

When Courtney B. Vance won his Tony, he thanked wife Angela Bassett for persuading him to do “Lucky Guy.”
Bassett explained, “I said, ‘Go and do it,’ because it’s really the kids, the kids will be all right. I’ll basically be a single mother for six months. ‘You’ve got to do it, that’s who we are.’”

He came “to congratulate Andrea Martin. We’ve known each other 40 years, we did ‘Godspell’ in ’72 together. She wasn’t convinced she was going to win, but we all knew.”

“This is the original dream. To have it come true, all these years later — it’s breathtaking. It really is,” said Billy Porter of his Tony win. “I wasn’t really nervous until I saw the cameras coming over towards me. Then I thought, ‘Oh shit. Now it’s time.’”

Cyndi Lauper, the first woman to win the Tony for best score, addressed the “Kinky Boots” celebrants. “Could someone get me some chicken?” she began, then confided, “It means something extra special that I’m walking through history with you guys. I’ll miss you. I’ll be on the road singing on some stage but I’ll be singing up to the rafters listening back for your voices.” She went on: “Never ever ever stop. Be like me, I never could stop because I just can’t. It’s them red shoes, once you put them on can’t take them off.”

“Boots” director Jerry Mitchell, who won a Tony for choreography, put it all in perspective: “The truth of the matter is we’re all going to go back to work on Tuesday. Who said it? ‘Tomorrow, we’re last year’s winners’? On Tuesday, you’ve got to go back and do what you did last Tuesday.”