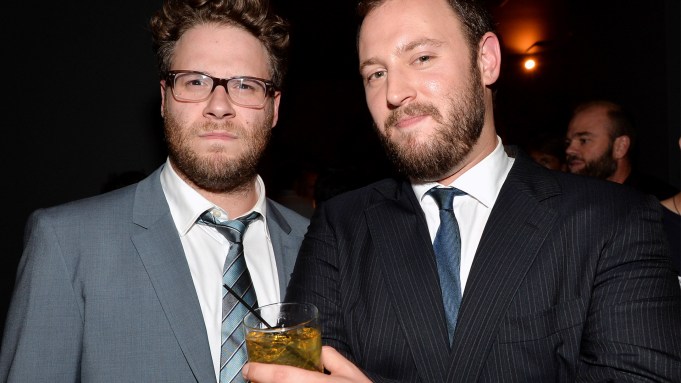 Columbia’s comedy “This is The End” follows a group of guys facing the end of the world together. Unfortunately, not all the thesp “bros” could make it to the L.A. premiere to face the paparazzi together. M.I.A. June 3 at the Regency Village Theater in Westwood were James Franco and Jonah Hill.

“I’m a little upset with those guys,” said Danny McBride, who plays “himself” in the pic. “I was looking forward to having shots with them tonight. But Franco’s probably out improving the world somewhere and I think Jonah’s actually at a bachelor party for one of his oldest friends — not like he’s old but one of his friends he’s had for a long time.”

“A lot of time is wasted on set by actors just walking back and forth to their trailers, so we came up with a mechanism to keep them on set, which was to put all the shit they liked in a little room that was like 10 feet away from the set,” said Rogen. “It was very helpful.”

And what was kept in this lounge to keep the boys happy?

“It was a hell of a place to show up to work everyday. It was the best!” said pic’s Jay Baruchel. “They had an Xbox, a fridge full of pop, a bunch of crackers, ping-pong table, candy, air-conditioning, what else could you need? There was a washroom there too!”

Emma Watson, Mindy Kaling and Craig Robinson also made appearances on the red carpet, as screaming fans across the street chanted their names.