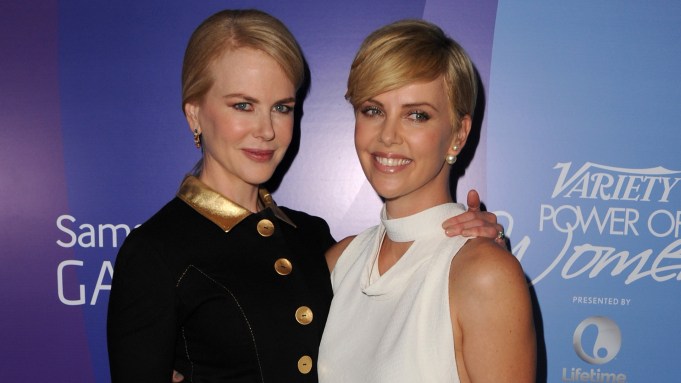 In between the clinking of utensils and gab between members of the showbiz elite, the ballroom at the Beverly Wilshire hotel was filled with laughs, as A-list femmes took the stage to accept their kudos at Variety’s annual Power of Women luncheon.

Surprisingly, though, it was the woman with the biggest comedic resume that hushed the room in an emotional moment.

Lifetime Impact honoree Amy Poehler took to the podium to discuss the organization Worldwide Orphans, and asked attendees to close their eyes during the luncheon and remember a moment when as a child they felt warm and taken care of.

“Open your eyes and realize that there are so many children in the world who have nothing,” Poehler said, beginning to cry on stage. “They have nothing. They have no one who lights up when they walk in a room, and no clothes, or safety, or food. And so who are we to be in this room, and be somebody living this life without helping them?”

Aisha Tyler had the crowd howling as emcee of the confab, hustling attendees to their seats from the podium as she quipped, “If I waited 400 years for a black president, I can wait for you white people to sit down!” Then, as she briefly fumbled a line from the teleprompter, Tyler said, “I don’t know what happened…Shots?…That’s what happened. There’s cocaine in the champagne.”

As the seven Lifetime Impact honorees including Poehler prepared to take the stage and discuss charity foundations close to their hearts, Tyler remarked, “I look forward to going home and questioning the validity of all of my life choices.”

“My wife said Nicole carried herself with the conviction of a leader in seventh grade,” Baker relayed to the crowd. “It was clear at 13 years old that she was destined to do big things.”

Kidman, who repped international foundation U.N. Women, said, “I became involved with this organization because I was raised by a feminist mother — and she said to never be frightened of using the ‘F’ word!”

Both Jennifer Hudson and Kerry Washington reflected on their youth and how far they’ve come while on stage accepting their award, with Washington encouraging the audience to understand the impact of arts education on children in low income areas. She recalled her days of walking to school and passing “crack pipes and syringes” on the street, and Hudson became emotional as she noted, “Where I come from, it’s all about negativity, and who shot who.”

Hudson’s Julian D. King Gift Foundation, the singer-thesp explained, strives to give young kids the opportunity to see a world beyond the negativity of impoverished neighborhoods. Washington’s emphasis on arts education was underscored as the “Scandal” topliner stated, “Arts are not something you add to a school when it’s doing well. It’s what you do to unlock the problems of the country.”

Honoree Charlize Theron also harked back to her younger years as a girl growing up in South Africa. Theron, a vocal advocate for HIV awareness and AIDS research, said that in her home of South Africa, “we saw an entire generation virtually wiped out from AIDS. South Africa has the highest number of people living with HIV in the world — 12% of South Africa’s population is HIV positive.”

Theron said, however, “It’s impossible for me to accept this award because there’s someone here so much more powerful than me.” Then, through tears, Theron nodded to her mother in the audience from the podium.

“I hope you’re okay with me giving this award to my mom. That bitch was building roads in Africa when no woman was doing that. I thank you, Mom, for teaching me to by your actions how to be a strong woman, and for turning me into a pussy every time I talk to you.”

Sony’s Amy Pascal also brought a familial connection to Power of Women, praising her sister Jenny — who was also in attendance — for being a support system. Both tout the power of Teen Line, an org devoted to connecting teens with other teens for counseling.

“Anyone who tells you women don’t help each other is a man!” Pascal exclaimed.

Sony CEO Michael Lynton, who introduced Pascal, wasn’t one of those men. The chief said on stage, “This may sound odd, but I actually feel comfortable being at an event celebrating powerful women…I learned long ago that women are much more [adept] than men about collaboration and finding solutions, which makes them great bosses and partners. Women also often have the answers and more often than not us guys should just stay quiet and get those answers!”

“I remember this blond actress was delivering brownies to the crew, and she had this insanely infectious laugh…There was something about her that put me at ease and said, ‘Stay with this girl, she’s where the party’s at.'”

Banks stressed the importance of heart health in women, but with a comedic edge: “There’s a lot of talk about boobies, and I’m all about boobies,” Banks said. “But you are four times more likely to die from heart disease than breast cancer…I mean when was the last time your gyno checked your cholesterol?”

Poehler ultimately stuck with her funny roots, acknowledging the other-worldly aspect of events like Variety’s Power of Women that bring together such esteemed members of the biz.

“We are here in Beverly Hills, which is the moon — the weirdest place in the world,” Poehler said. After collecting herself following her emotional speech, the comedienne remarked, “Remember, giving to charity is good for your skin, and makes your ass smaller!”

The audience laughed, appreciating the reminder.