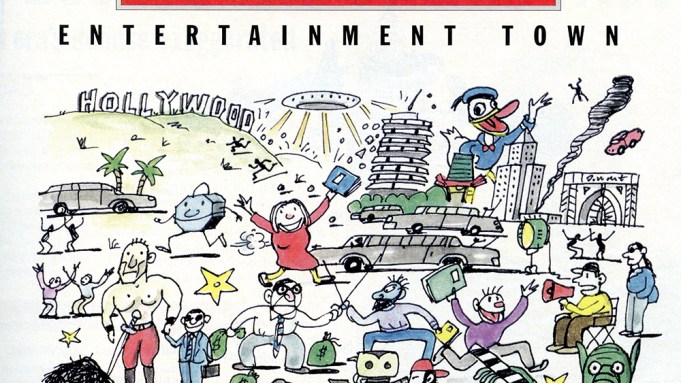 J.C. Suares, graphic designer and illustrator whose credits include the revamped look for weekly Variety in the early 1990s, died July 30 in Englewood, N.J., of  heart failure after two surgeries to battle  a bacterial infection that had spread through his system. He was 71.

In his long career, he designed or redesigned publications including New York magazine, the New York Times, Broadcasting & Cable, Connoisseur, Buzz, Inc. and Fast Company. He was the founding creative director of Poz and 7 Days magazines.

His illustrations appeared on the cover of the New Yorker, Atlantic and Publishers Weekly, among many others. At the time of his death, he was working on the latest edition of Columbia College Today, the alumni publication that he has designed for over 25 years.

He also designed, wrote and illustrated more than 100 books, including “Hollywood Dogs,” “Funny Babies,” “Manhattan,” “Art of the Times.”

In 1989, Jean-Claude Suares was recruited by editor-in- chief Peter Bart, whose mandate was to revitalize Variety. Bart brought in more humor and attitude to the writing, along with new columns and features. Bart felt a more sophisticated graphic redesign was crucial to reflect the new plan.

The first few issues reflected their work, with different typeface and paper stock, and a less-cramped layout — a sharp departure from the 85-year tradition when the pages were all black and white with as many as a dozen stories on the front page.

Suares’ ideas became more noticeable by 1990, when the always-in-black Variety logo suddenly became red, and the front page carried multiple photos (which had been rarely used in the paper), fewer stories and one or two of Suares’ trademark sketches.

He spoke with a slight, indeterminate accent that reflected his multi-national upbringing, ranging from Egypt to Paris. Underneath a gruff demeanor, he was actually thoughtful and sensitive, and could get upbeat and animated when talking about his passions, including opera, polo, exercise and animals.

His critter books had fanciful titles like “Sexy Dogs” and “The Big Book of Cats.” Suares loved horses and kept several at his house in New Jersey. He also was an accomplished polo player.

Suares was born on March 30, 1942, in Alexandria, Egypt. His family moved to Italy, and then Suares moved to New York, where he briefly attended Pratt Institute. He served in Vietnam as an Army paratrooper. His work on Army newspaper Stars and Stripes fueled his interest in graphic design.

When the N.Y. Times introduced an Op-Ed page in 1970, Suares worked with the page’s editor Harrison Salisbury and design director Louis Silverstein to have artists create wordless, captionless interpretations of the article. Since he was fluent in several languages, Suares recruited artists from various countries to contribute.

He arranged a 1973 exhibition of the illustrations at the Musée des Arts Décoratifs in Paris, and edited the catalog.” But he hadn’t received permission for the exhibit, so was fired from the Times, though he continued to provide illustrations for the newspaper for many years.

He maintained his loyalty to the military. In July 2003, Suares designed a poster for Project Salute, in which a troupe led by Robert De Niro, Kid Rock and Wayne Newton went to Iraq to thank and entertain the troops.  The project was supported by Tribeca Enterprises, The Intrepid, Vanity Fair, MTV, NBA, and the USO.

He is survived by his wife, artist Nina Duran. Services are tentatively scheduled in September and will be announced later.