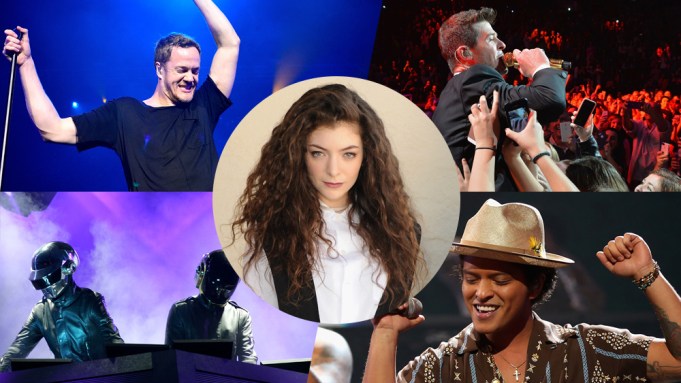 A mixed field of rap, pop and dance talent dominated the top categories in nominations for the 56th annual Grammy Awards, making for a wide-open race with no clear favorite and few megastars in the running for top honors at the music biz’s January kudofest.

There was zero consensus by members of the Recording Academy in the heavy-hitter categories, with no act garnering nods in all four key berths of record, song and album of the year and new artist. Meanwhile some of the year’s highest-profile and biggest-selling release received short shrift in the top categories, even as the artists racked up multiple nominations.

Rapper Jay Z, whose highly promoted “Magna Carta…Holy Grail” has shifted more than 1 million, was the year’s most nominated performer, with nine bids, most of them in rap categories. Pop superstar Justin Timberlake, back from a five-year layoff from music, has sold 2.3 million copies of “The 20/20 Experience,” but his seven nods came in the lower-profile pop and R&B fields. Kanye West landed two bids for “Yeezus,” both rap categories. (Lady Gaga’s latest, “Artpop,” was released after the Grammy eligibility window of Oct. 1, 2012-Sept. 30, 2013.)

Album of the year nominees are a grab bag of genres, from “The Blessed Unrest” by pop singer-songwriter Sara Bareilles to dance dynamo “Random Access Memories” by Daft Punk to “Red” by pop-country queen Taylor Swift to a pair of rap platters: “Good Kid, M.A.A.D. City” by Kendrick Lamar and “The Heist” by Macklemore & Ryan Lewis.

Competing for record of the year (presented to the artist, producers, engineers and mixers of the track) are Daft Punk & Pharrell Williams’ “Get Lucky,” Imagine Dragons’ “Radioactive,” Lorde’s “Royals,” Bruno Mars’ “Locked Out of Heaven,” and “Blurred Lines” by Robin Thicke featuring T.I. and Pharrell.

In the album of the year slot, country-pop queen Swift, who corralled the honor in that category with “Fearless” in 2010, is the sole previous winner and nominee. Her late-2012 “Red” was the top-selling new release of last year, and has moved 4 million to date. In 2012, it was bested only by post-Grammys sales of Adele’s “21.”

Breakthrough rap artists notched the greatest attention in the nomination balloting. Rapper Macklemore, who has been active since 2000 and partnered up with Lewis in 2006, busted out in late 2012 with the independently released “The Heist,” which featured the ubiquitous single “Thrift Shop” and the gay marriage-themed “Same Love”; the duo scored seven nominations. Tallying an equal number of nods was Compton’s Lamar, whose only release prior to his widely admired Interscope debut was a title on the indie Top Dawg label.

Rap/R&B performer Pharrell Williams managed to pull down seven nominations, of a very curious variety, since all but his producer of the year nod were the product of his supporting participation on two big singles, Robin Thicke’s “Blurred Lines” and Daft Punk’s “Get Lucky.”

Tapped in both the song of the year and record of the year categories (and in a total of four categories) was 17-year-old New Zealand native Lorde, who drew comparisons to sextuple 2012 winner Adele with her debut hit “Royals.” However, in perhaps the year’s biggest surprise — and unlike her English predecessor, who took home the best new artist hardware in 2009 — the Kiwi vocalist was not recognized with a nomination in the category.

The record of the year nominees comprise singles that were all omnipresent on the airwaves this year. “Get Lucky,” the early-summer smash by French house music duo Daft Punk, no doubt helped the helmeted twosome collect their first album of the year nomination. The pair previously collected two Grammys in dance music categories.

The year’s darkest horse is certainly California-born singer-songwriter Bareilles, whose “The Blessed Unrest” debuted and peaked at No. 2 in July. A former celebrity judge on NBC’s “The Sing-Off,” she has previously been nominated for three Grammys, with no wins. She received only one other nomination, for best pop solo performance, in the 2014 running.

Vying in the best musical theater album category are the cast albums for multiple Tony Award winner “Kinky Boots,” “Matilda: The Musical” and “Motown the Musical.”

Nominees in the top categories were unveiled during a one-hour CBS special that aired live from the Nokia Theatre in L.A. Friday. CBS will telecast the Grammycast live on Jan. 26 from Staples Center in Los Angeles.