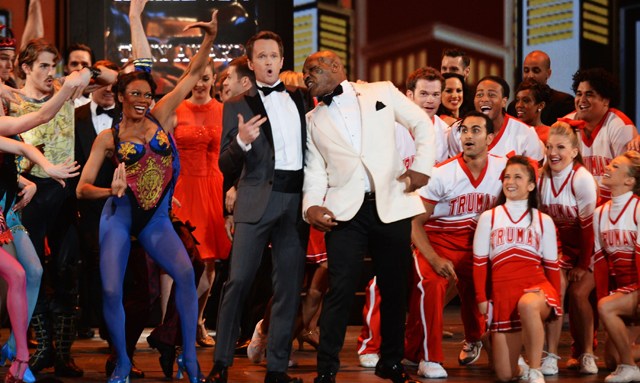 The thigh-high stilettos of Broadway musical “Kinky Boots” strutted off with the 2013 Tony Awards ceremony, notching a total of six wins including new musical.

That tally for the show, about a young man who revitalizes his family shoe factory by teeming up with a drag queen, put the title ahead of the four wins for “Matilda,” the Brit hit that, alongside “Kinky,” was considered the other award frontrunner of the 2012-13 season.

Neither of the evening’s frontrunners took the award for director of a musical; that kudo went, as expected, to Diane Paulus for “Pippin,” which snagged a total of four trophies including musical revival, lead actress (Patina Miller) and featured actress (Andrea Martin).

In the evening’s competitive new play category, the statue went to Christopher Durang’s “Vanya and Sonia and Masha and Spike.”

Besides the ceremony’s neck-and-neck race among the two big tuners, the major surprise of the night saw Tracy Letts win the lead actor in a play laurel for his perf in “Who’s Afraid of Virginia Woolf?,” besting the favorite in the category and one the biggest names on the nominees roster, Tom Hanks (“Lucky Guy”). The leading actress in play laurel went to Cicely Tyson (“The Trip to Bountiful”).

“Woolf?” also notched the top play revival trophy as well as director of a play (Pam MacKinnon). It’s only the second time both directing Tonys, one for play and one for musical, have gone to women, following the 1998 wins for Julie Taymor (“The Lion King”) and Garry Hynes (“The Beauty Queen of Leenane”).

Nonprofit Lincoln Center Theater did well with a total of four awards. The company originally produced “Vanya and Sonia” (with New Jersey’s McCarter Theater) in its Off Broadway run prior to the title’s Rialto stint, while the org’s Broadway world preem of Douglas Carter Beane’s “The Nance,” toplined by Nathan Lane, snagged three design awards — costumes (Ann Roth), sound (Leon Rothenberg) and set (John Lee Beatty) — as if in recompense for the fact that Tony nominators left the title out of the competish for new play.

Many observers had expected “Boots” composer-lyricist Lauper to win for score, and she didn’t disappoint the crowd with a funny acceptance speech and some excellently punky hair. “I want to thank Harvey Fierstein for calling me up [to work on the show],” she said. “I’m so glad I was done with the dishes.”

“Boots” star Billy Porter also was largely thought a likely winner in his own category. “I share this award with you,” the lead musical actor winner said to his competitor and co-star Stark Sands. “I’ll keep it at my house, but I share it with you.”

For an awards show that has long grappled with the conundrum that the new titles being honored are precisely the ones the rest of the country hasn’t heard of yet (and therefore won’t tune in for), the opening number played like something of a mission statement. In a good-humored original song by Lin-Manuel Miranda and Tom Kitt, the song was an all-of-Broadway, all-the-time grab bag that trotted out representative performers from more familiar titles including “The Lion King,” “Jersey Boys,” “Chicago” and “Spider-Man: Turn Off the Dark” alongside the night’s nominees such as “Kinky Boots” and “Matilda.”

SEE MORE: Tonys Behind the Scenes

The trick for the ceremony’s producers has always been to balance insider gags — this year’s opener incorporated a reference to Alec Baldwin’s on-the-record pan of a New York Times critic and a crack about Main Stem shows being so packed with moppets that it looks like a Chuck E. Cheese – with the older properties that have been around long enough to accumulate a pop culture profile.

The Tony telecast has long been seen as Broadway’s biggest moment in the national spotlight, and the industry now seems to have largely embraced the televised ceremony as an overall Rialto brand-building enterprise. Whereas in past seasons producers have objected to production numbers from any shows that were not nominees, this year nary a fuss was raised over the inclusion of “Motown” — left out of the running for this season’s new tuner award, but a strong-selling crowdpleaser that seemed a no-brainer for a showcase that could turn heads on TV.

“The Phantom of the Opera,” the globally recognized title that celebrated its 25th anniversary on Broadway this season, and last year’s Tony winner “Once” also scored spots, while actors from “Once,” “Newsies” and “Chicago” — introduced by character name only — announced a handful of this year’s kudo winners.

In its bid to be all things to all demographics, the telecast at times overtipped into what felt like desperation. Theater fans were left scratching their heads at the inclusion of 1960s band The Rascals performing “Good Lovin’,” even if the group did reunite for a limited Main Stem concert stint that sold notably well this spring. The obit segment’s inclusion of Cyndi Lauper performing one of her hits, “True Colors,” could also been viewed in the same light, but at least Lauper was a winning sentimental fave that night.

Snagging the first straight performance showcase of the night, “Matilda” got pride of place as the season’s critical fave. But the number they did, a medley centered around song “Revolting Children” (rather than the one auds come out singing, “When I Grow Up”), underscored why the darkly satirical tuner is one of the tougher sells on the Rialto despite its current robust grosses. On TV, “Revolting Children” played as a raucous, spiky song that could put off as many people as it grabbed; by contrast, the user-friendly teen uplift of now-defunct “Bring It On,” spotlit in song “It’s All Happening,” seemed tailor-made for a standalone TV snippet. “Kinky Boots,” meanwhile, highlighted its full-cast Act One closer, complete with factory-line treadmill dance, in “Everybody Say Yeah.”

The still-running revival nominees also picked TV-ready moments for their time on the air, with “Cinderella” performing a medley that showed off its transforming costumes and “Annie” punctuating familiar orphan anthem “Hard Knock Life” with an appearance by Jane Lynch, the “Glee” star currently appearing in the tuner.

The Tonys returned this year to Radio City Music Hall after a two-year stint at the smaller Beacon Theater, with a mixed bag of benefits and disadvantages. The circus extravaganza of revival “Pippin” had no trouble filling the stage or the TV screen, but Radio City’s cavernous space did no favors to the song from intimate musical “Once” (whose skedded segment was shortened in the live telecast due to the ceremony’s time overage).

Neil Patrick Harris gave another smoothly charming perf in the emcee role, a feat that seemed less remarkable than it is only because it was his fourth time in the gig. The broadcast’s original songs embraced a self-aware humor that worked more than it didn’t, particularly in a funny sequence that brought out recent stage-to-screen converts Andrew Rannells (“The New Normal”), Megan Hilty (“Smash”) and Laura Benanti (“Go On”) singing about TV work vs. the stage.

The 67th annual Tony Awards were broadcast live by CBS, which has aired the show annually since 1978 and recently reupped its deal to do so through 2018. Telecast is traditionally a low-rated one and has seen viewership decline further in recent years, but it’s nonetheless something of prestige offering that plays strongest to legit avids, a generally well-off, well-educated demo that still holds significant appeal to advertisers.

Best Play: “Vanya and Sonia and Masha and Spike”

Best Book of a Musical: Matilda The Musical

Best Revival of a Play: “Who’s Afraid of Virginia Woolf?”

Best Revival of a Musical: “Pippin”

Best Performance by an Actor in a Leading Role in a Play: Tracy Letts, “Who’s Afraid of Virginia Woolf?”

Best Performance by an Actress in a Leading Role in a Play: Cicely Tyson, “The Trip to Bountiful”

Best Performance by an Actor in a Leading Role in a Musical: Billy Porter, “Kinky Boots”

Best Performance by an Actress in a Leading Role in a Musical: Patina Miller, “Pippin”

Best Performance by an Actor in a Featured Role in a Play: Courtney B. Vance, “Lucky Guy”

Best Performance by an Actress in a Featured Role in a Play: Judith Light, “The Assembled Parties”

Best Performance by an Actor in a Featured Role in a Musical: Gabriel Ebert, “Matilda The Musical”

Best Performance by an Actress in a Featured Role in a Musical: Andrea Martin, “Pippin”

Best Costume Design of a Play: Ann Roth, “The Nance”

Best Sound Design of a Play: Leon Rothenberg, “The Nance”

Tony Honors for Excellence in the Theatre: