Musical producers came, they saw, they solved the problems, they even survived the crix 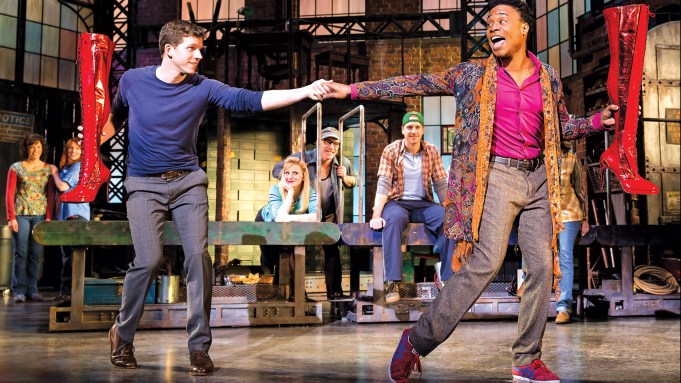 This season’s Tony-nommed musicals took various routes to Broadway. Here’s how a few producers recall that often arduous trek to the bigtime.

“Kinky Boots,” the musical, began with producer Daryl Roth seeing the movie when it screened at Sundance in 2006. The British pic went on to have a very small release. “A little cult film,” as she describes it.

Comparisons to the movie can sometimes doom a legit project — think “Breakfast at Tiffany’s” or “Shrek” or “The Little Mermaid.” But who had seen the movie “Kinky Boots”? “Which was good news for us,” says Roth. “There were no comparisons.”

In the beginning, Fierstein suggested a few scenes and Lauper wrote a couple of songs. “And we all thought, ‘Wow!’ ” Roth says.

The producers’ decision to preview the show out of town proved crucial. “We used Chicago to gauge what was being told,” Luftig recalls. “Was it clear? How do you give the audience the information it needs? Did we need to be clearer? Chicago audiences are smart. They let you know when they appreciate something and when they’re not engaged. You can sense it.”

The tuner sports not one but two protagonists: Charlie, who needs to save his outdated shoe factory, and Lola, the drag performer who designs the extravagant shoes that will revolutionize the factory.

“In Chicago, we learned there needed to be a better balance between Charlie and Lola,” Roth notes. Lola, being all glitter and glam, tended to not only dominate but get all the sympathy. “Charlie had to hold his own more, and we thought the audience did turn away from him. With his anger, we had to pull that back a little. He had to realize how hurtful he’d been to Lola.”

Fierstein addressed those issues in his book, Lauper wrote a new song for Charlie. But finding the right balance wasn’t limited to just the text.

“We learned that some of the music was too loud for the audience,” says Roth. “They couldn’t hear the lyrics.”

Plus, in the wake of “Wicked,” songwriters often try to turn every number into another “Defying Gravity.”

Says Luftig: “Every number doesn’t need to end with a big crescendo. Cyndi didn’t want that.”

While “Kinky Boots” went to Chi first, “Matilda” had its out-of-town tryout in another country. In fact, the show has continued to evolve ever since its first incarnation in Stratford, U.K., and its subsequent West End production.

“For Broadway, the intention was to create a brand-new show,” says producer Michael David of the Dodgers, which partners in Gotham with the show’s original producers, the Royal Shakespeare Company.

The RSC contacted the Dodgers about a Broadway production shortly after “Matilda” opened in London in 2011. “We were invited. We hadn’t seen it yet,” David recalls. When they did, “We were knocked out by it.”

Regarding any changes to the show, David says, “This production reflects what happens when artists get the rare opportunity to do something all over again, not to mention it reflects the blend of the English originators and all the Americans who were brought on board.”

Despite those many British accents, 35 of the 37 Broadway cast members are Americans.

“The core elements of story, book and songs are the same with small changes, fine-tuned to this audience,” David adds. It’s an audience that’s a bit savvier than it was a decade or two ago. “We felt optimistically that ‘Harry Potter’ had prepared us all. It’s made it go down so easily here,” David says of the tuner’s very British story about an abused young girl in a boarding school.

In its transfer to Broadway, one of the show’s biggest changes has been Rob Howell’s set, which comprises 5,000 tiles. In the West End, there are only 1,500 tiles that magically transform into a variety of locales. “They put them everywhere they could,” David says of the tiles. “They come quite far out into the house.”

Some things about “Matilda” haven’t changed, such as the 16 roles for child actors, including the four girls who alternate to play the 5-year-old title character. “One of our rehearsal halls had to be changed into a classroom,” says David, who isn’t a novice at producing shows with kids thanks to a producer’s resume that includes “My Secret Garden,” “The Music Man” and “The King and I.” But 16? “It’s a lot,” he emphasizes.

When they’re not on stage performing, those little girls and boys are the perfect audience for two Tony-nommed revivals this Broadway season.

In 1957, CBS aired Rodgers and Hammerstein’s original made-for-TV tuner “Cinderella,” starring Julie Andrews. It’s a bit of a mystery why this show, despite having toured Asia and Europe, never made the trip to Broadway. As producer Robyn Goodman tells it, the R&H Org’s Ted Chapin saw the potential, and approached her three years ago. “Ted had it in his mind that someday someone would freshen it up for modern audiences,” says Goodman, who remembered the score fondly and the book somewhat less so.

She told Chapin, “If I can deliver a new book where Cinderella has some purpose and helps the prince as much as he helps her, and it not be just a handsome guy story, great!”

And Goodman added, “I think I should find a woman writer.”

But the women she approached weren’t interested, and “young women didn’t have the same passion for the music or the story.”

Meanwhile, Douglas Carter Beane came to Goodman’s office to pitch other projects. He was a guy, but he did write and he had kids. “He turned me down too,” Goodman recalls. But a month later, Beane came back, having down a tremendous amount of research into the original 17-century French story, which was a satire on current mores. Voila! a new book emerged for a classic Rodgers and Hammerstein musical, which has the unique distinction of being Tony nommed for musical revival and original book for a musical. Go figure.

Goodman is delighted with the number of young boys who’ve come to see the show. “They’re not our target audience. I’m sure it’s not the first show they wanted to see. But they’re hooked right away when the guy fights a giant,” Goodman says.

Goodman even has plans for a “Cinderella” TV commercial, one that contains nothing but interviews with men saying things like, “I didn’t think I’d like this, but I loved it. It was funny and charming.”

As for the princess story being too retro or downright anti-feminist, Goodman retorts, “I haven’t had any woman yell at me about the message. We sell tiaras.” It comes complete with a very PC sticker: “A princess is kind, generous, compassionate, courageous and believes she can change the world to make it a better place to live in.”

Goodman adds, “I wanted it to read ‘the world in which she lives,’ but I was told to lighten up on the grammar.”

Extra-fond memories of a classic musical is what also inspired another producer to revive another so-called little-girls tuner.

Thirty-plus years ago, Arielle Tepper Madover was one of those little girls — only her favored musical wasn’t “Cinderella” but “Annie.” “Allison Smith was my Annie, then I saw it five more times on Broadway. Then my parents took me to the movie premiere — I have no idea why. It is so not their thing — and I listened to the album every day before seeing the movie.”

Three years ago, Tepper Madover was in previews with John Logan’s “Red” on Broadway. “I had my third child and was trying to figure out what happens next in life and I thought about doing a musical, which I’d never done before, except ‘The Last Five Years,’ which was small and Off Broadway. I’d never done a big musical, so if I’m going to do a big one I should do one I love. I’m an only child. These girls in ‘Annie’ were my friends. They were who I turned to when I was lonely. It was a part of me.”

Other producers were vying for the Broadway rights. “Luckily, they gave them to me!” says the producer.

Tepper Madover feels “Annie” is more relevant than ever. She explains: “The show is about the recession and adoption and finding your own family and foster care and rescue dogs and the world we live in, which is different from what it was 35 years ago. Our definition of family has changed. Anyone can be a family. It doesn’t have to be blood relatives. People talk about those things. They didn’t talk about them 35 years ago.”

What Tepper Madover’s three kids like about “Annie” is what about kids have always responded to. “They love Sandy and the little girls and ‘Hard Knock Life,’” she says. But of course her kids have a special attraction to this particular Tony-nommed revival. As Tepper Madover’s 5-year-old explained it, “Mommy, I’m so lucky you’re the producer of ‘Annie’ because I can see it anytime!”

Like “Annie,” Stephen Schwartz’s “Pippin” was first produced on Broadway in the 1970s. Unlike “Annie,” it’s never been blessed with a Broadway revival — until this spring.

“I guess no one had figured out how to make it fresh and new and vital for our time,” says lead producer Barry Weissler. He, director Diane Paulus and most critics agree that the 2013 Tony-nommed revival does just that. Regarding the Bob Fosse original, Weissler says, “Diane grew up on it. I remember it from 1972, especially John Rubinstein and Ben Vereen and Bob Fosse’s work. But we didn’t want to replicate that.”

Separately, Weissler and Paulus went to see perfs of “Traces,” an acrobatic show by the Montreal troupe 7 Fingers, and were inspired. “It possessed the proper physicality to refresh the production, to be a complement to Fosse,” says Weissler.

To take the acrobatic theme even further, the Weisslers brought aboard Cirque du Soleil costume designer Dominique Lemieux, who makes her Broadway debut with the show.

Bring It On, A Christmas Story and The Mystery of Edwin Drood have also been Tony nommed for best musical for the first two and musical revival.