Film Review: ‘This Is the End’ 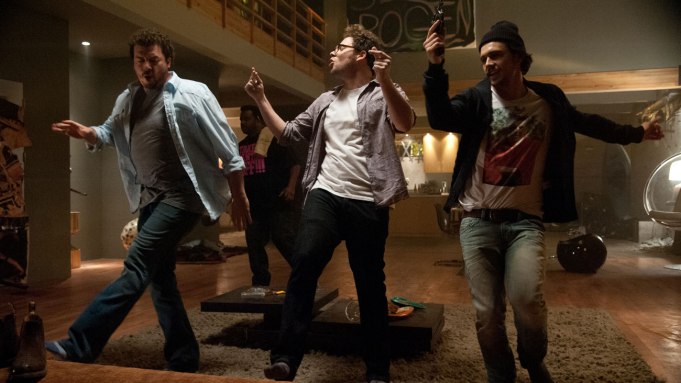 The apocalypse, generally seen as an occasion for sober reflection and perhaps deep despair, instead provides an excuse for ostensibly grown men to drink their own urine, kick around a guy’s severed head and have long, drawn-out arguments about their autoerotic habits in “This Is the End.” A sloppy, sophomoric, sometimes awfully funny horror-laffer hybrid that speculates as to how Seth Rogen, Jay Baruchel and other members of the Judd Apatow comic fraternity would (mis)behave if forced to spend Armageddon in close quarters, this directing debut for co-writers Rogen and Evan Goldberg offsets its slightly smug premise with a clever sense of self-parody and near-cataclysmic levels of vulgarity. Mid-summer competition aside, commercial disaster seems unlikely.

In making the decision to have well-known comedic actors play themselves, regular screenwriting partners Rogen and Goldberg (elaborating on their 2007 short “Jay and Seth Versus the Apocalypse”) clearly had fun playing up and/or working against different aspects of each star’s persona. As written, Seth (Rogen) is the guy everyone likes, the good-natured goof who, apart from shedding several pounds, hasn’t been changed much by his Hollywood fortunes. Jay (Baruchel) is the gangly, awkward, slightly neurotic one who doesn’t quite fit in with Seth’s newer, more famous friends.

These friends naturally include Seth’s “Pineapple Express” co-star, James Franco, who’s hosting a star-studded party at his ridiculous, cubist-style Hollywood Hills estate when catastrophe strikes without warning. Fiery sinkholes open up, cars explode, and numerous people are mysteriously beamed up into the heavens, while others meet a much gorier fate down below. (Don’t get too attached to Michael Cera — or, for that matter, Rihanna, Mindy Kaling and Christopher Mintz-Plasse.)

As Los Angeles burns, with no Internet or TV service to provide any insight into what the devil is going on, Jay and Seth decide to take shelter at James’ house. There, they must share their limited space, water, food and weed with three other survivors: Jonah Hill, very friendly and very creepy; boisterous life-of-the-party type Craig Robinson; and Danny McBride, who gets the most interesting and presumably least accurate characterization as a borderline sociopath who has any number of unsanitary ways of making himself at home. (Special mention must be made of the brief appearances of Cera, gleefully sending up a kinky, coke-snorting, nonexistent version of himself, and Emma Watson, temporarily halting the frat-house shenanigans with her ax-wielding turn.)

There’s a mild air of self-satisfaction to all this inside-Hollywood spoofery, and even a few self-deflating jabs (at the expense of career misfires like “The Green Hornet” and “Your Highness”) can’t entirely dispel it. Yet the conceit works nonetheless. The actors’ sense of fun is infectious (even when they panic, they do so with a wink), and it feels in keeping with the movie’s general refusal to take anything here seriously, which not only allows Rogen and Goldberg to get away with some of their more appalling setpieces, but also paves the way for a surreally upbeat finale.

Although doctored for the screen, the characters’ relationships strike authentic, relatable notes of male frustration and anxiety, smoothly handled by actors who are clearly at ease grooving on each other’s comic rhythms. Simply by boasting the weirdest, most diverse resume of the bunch, Franco comes off as the best sport here; his character’s house, which serves as the pic’s primary backdrop, is amusingly stuffed with garish modern artwork, including a giant sculpted phallus straight out of “A Clockwork Orange.”

That particular sight gag is consistent with the decidedly groin-focused nature of the proceedings, as when the house is suddenly invaded by a horned and visibly horny demon. These forays into outlandish supernatural territory, even more than the booze, the pot and the drawn-out banter sessions, are what lend “This Is the End” its spiky comic energy, even if the actual comedy feels haphazard and inconsistent much of the time. In some ways this is just a creepier, slightly funnier horror-pic spoof than anything in the recently resurrected “Scary Movie” franchise; along with its references to “Rosemary’s Baby” and “The Exorcist,” the film spends a considerable amount of time elucidating prophecies in the book of Revelation, often with an impressively straight face.

The deliberately scrappy production was lensed by d.p. Brandon Trost on a nocturnal digital palette, lit up by bursts of orange fire and smoke; cheesy-looking but serviceable f/x add to the low-rent charm. An obligatory appearance by “Gangnam Style” as well as a memorably bizarre contribution from the Backstreet Boys figure into the lively soundtrack.

Film Review: ‘This Is the End’