Continue to Variety SKIP AD
You will be redirected back to your article in seconds
Jun 7, 2013 11:19am PT

Jimmy Kimmel Finds Will Smith His Next Role (VIDEO)

Plays a blind ref in 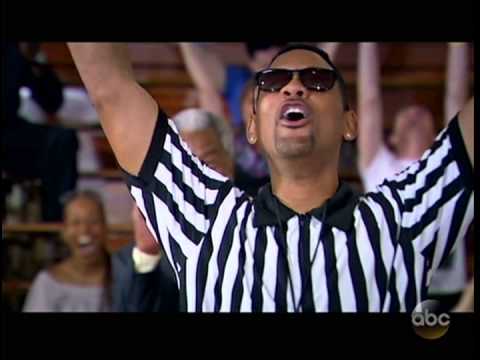 Will Smith has never been afraid of an acting challenge and Jimmy Kimmel handed him one on “The Jimmy Kimmel Show” as the two debuted the fake trailer for “Blind Ref.”

In an effort to plug his latest film “After Earth,” which disappointed this past weekend at the box office, Smith was in high spirits as he and Kimmel introduced the exclusive trailer for “Ref,” in which he plays a blind man trying to make it as a basketball referee.

SEE ALSO: “After Earth” Craters at the Box Office

Even with “After Earth” not meeting expectations, Smith proved he’s still a good sport when it comes to the talk show circuit. He recently surprised host Graham Norton on his show by singing the “Fresh Prince of Bel-Air” theme with his son Jaden and DJ Jazzy Jeff.

Smith should stay busy after “Earth” publicity wraps. He is currently in pre-production on the drama “Focus” at Warner Bros. and a remake of “The Wild Bunch” with Warners as well.