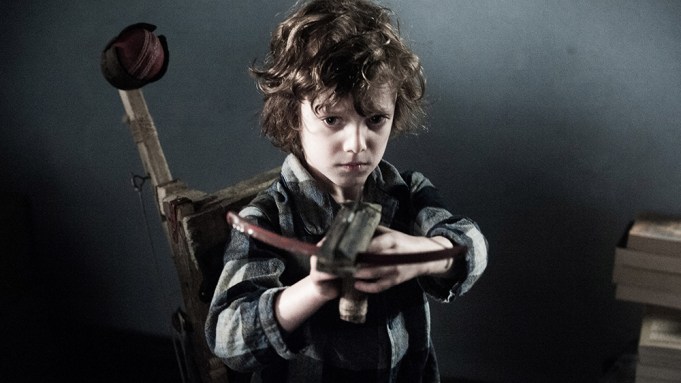 “The Guest,” the latest effort from horror helmer Adam Wingard; “Killers,” a Web-based serial-killer thriller from Indonesia’s Mo Brothers; and “What We Do in the Shadows,” a mock-doc collaboration between New Zealand-based directors Taika Waititi and Jemaine Clement (of Flight of the Conchords) are among the eight oddball titles set to make their world premieres in Park City at Midnight at the 30th annual Sundance Film Festival.

Having noted that the dramatic competition lineups (unveiled Wednesday) contained a number of films with comedic and horror-thriller elements, festival director John Cooper pointed out that the distinctions between competitive and non-competitive titles were blurring more than ever.

“We considered all the Midnight titles for competition at one point,” he said. “It’s very fluid.”

The festival, which runs Jan. 16-26 in Park City, Utah, also announced films selected for New Frontier, Spotlight and, for the first time, Sundance Kids, a section devoted to children’s programming. The two tot-friendly titles slated there are “Ernest and Celestine,” a French-language toon from directors Benjamin Renner, Stephane Aubier and Vincent Patar, and “Zip and Zap and the Marble Gang,” a Spanish live-action kidpic from director Oskar Santos.

Artist Doug Aitken’s “The Source (Evolving),” a series of filmed conversations about creativity in the 21st century, will have its U.S. premiere as the centerpiece of the festival’s New Frontier section devoted to independent/experimental art. The expanded sidebar will feature 13 installations housed in a new 5,000-square-foot location at the Gateway in Park City, adjacent to Main Street, as well as five films.

The festival’s Spotlight slate, a best-of-fests compilation of “cinema we love,” is dominated by selections from Cannes (“Blue Ruin,” “The Lunchbox,” “Only Lovers Left Alive,” “Stranger by the Lake”) and Toronto (“The Double,” “Ida,” “R100”). Steven Knight’s “Locke,” starring Tom Hardy, will make its North American debut in Park City after having premiered at Venice earlier this year.

Sundance will announce its Premieres and Documentary Premieres titles on Monday.

The eight world premieres in this section are from the U.S. unless otherwise specified.

“The Guest” — Directed by Adam Wingard. Written by Simon Barrett. A soldier on leave befriends the family of a fallen comrade, but it’s revealed that he’s not who he says he is. Cast: Dan Stevens, Maika Monroe, Leland Orser, Lance Reddick, Chase Williamson, Brendan Meyer.

“Under the Electric Sky (EDC 2013)” — Directed by Dan Cutforth and Jane Lipsitz. A 3D account of Electric Daisy Carnival Las Vegas, the largest music festival in the U.S.

The five films in this section are world premieres unless otherwise specified.

“Living Stars” (Argentina) — Directed by Mariano Cohn and Gaston Duprat. A portrait of Argentinians publicly performing dance numbers they normally only do alone, in front of a mirror.

“Through a Lens Darkly: Black Photographers and the Emergence of a People” — Directed by Thomas Allen Harris. Written by Harris, Don Perry and Paul Carter Harrison. An epic that moves through past and present using the work of contemporary photographers and artists.

The eight films in this section are from the U.S. unless otherwise specified.

“Ida” (Poland) — Directed by Pawel Pawlikowski, written by Pawlikowski and Rebecca Lenkiewicz. A young notiviate nun in 1960s Poland uncovers the truth of her own identity and its roots in the Holocaust. Cast: Agata Kulesza, Agata Trzebuchowska, Dawid Ogrodnik.

“R100” (Japan) — Directed and written by Hitoshi Matsumoto. A family man with a taste for S&M finds himself pursued by a gang of dominatrices in this bizarre take on the sex comedy. Cast: Nao Ohmori, Lindsay Kay Hayward, Hairi Katagiri.

“Ernest and Celestine” (France-Belgium-Luxembourg) — Directed by Benjamin Renner, Stephane Aubier and Vincent Patar. Written by Daniel Pennac. An animated adaptation of Gabrielle Vincent’s children’s books about the parallel worlds of bears and mice.

“Zip and Zap and the Marble Gang” (Spain) — Directed by Oskar Santos. Written by Francisco Roncal, Jorge Lara and Oskar Santos. An adaptation of a 1950s comicstrip in which the two titular characters are sent to a correctional school, where they stumble on the most exciting adventure of their lives. Cast: Javier Gutierrez, Daniel Cerezo, Raul Rivas, Claudia Vega, Marcos Ruiz, Fran Garcia.