Preview Review: ‘The Hobbit: The Desolation of Smaug’ Trailer 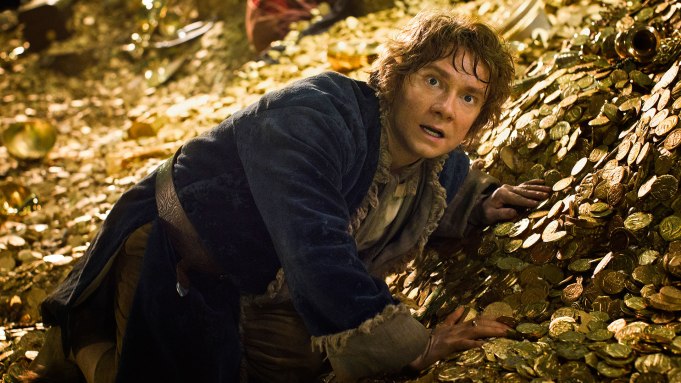 There’s not much Hobbit in the teaser for “The Hobbit: The Desolation of Smaug.” Instead, this first appetite-whetter for Part Two of Peter Jackson’s epic J.R.R. Tolkien adaptation overflows with dwarfs, elves, assorted beasties and one very surly looking dragon (the Smaug of the film’s title).

Strategically timed six months before “The Desolation of Smaug’s” Dec. 13 release, the teaser debuted online on June 11, three days before auds can see it on the bigscreen attached to Warner Bros.’ “Man of Steel.” Watching the elegant, goosebump-inducing montage, you immediately realize how different the task of this two-minute teaser is from your average first-look trailer. Technically speaking, worldwide audiences have already witnessed a three-hour teaser for “The Desolation of Smaug” in the form of last year’s “The Hobbit: An Unexpected Journey.”

Therefore, this trailer’s job is less about offering a taste of what’s to come than assuring fans that the follow-up will feature more of what they liked about the billion-dollar-grossing ($303 million domestic) epic. With that in mind, it’s not such a surprise that Martin Freeman’s heroic little Hobbit gets elbowed aside for sweeping CG vistas (from mountain cities to underground caverns), earnest pronouncements from the hunkier characters (there’s Orlando Bloom’s Legolas debating whether to get involved) and action-oriented shots of the group beset by assorted spider, bear and Orc attacks.

The trailer dispenses with narration in favor of soundbites from the Elvenking (Lee Pace) and Gandalf (Ian McKellen), while subliminally trying to amp the excitement with three snippets of corny ad copy: “Beyond Darkness … Beyond Desolation … Lies the Greatest Danger of All” — a claim that would have better suited the last of the “Lord of the Rings” movies, as Smaug surely poses less threat than Sauron did. But then, that’s the paradox of this entire nine-hour project, as Warners once again tries to suggest that this companion trilogy (adapted from a single shorter book) rivals the earlier epic.

Still, this two-minute teaser goes a long way to repair the disappointment of “An Unexpected Journey,” ever-dwindling in our memories, as it intermingles familiar glimpses of the unique world Jackson created with fresh sights, stoking a collective sense of wonderment with Bilbo (Freeman) surrounded by a cloud of Blue Morpho-looking butterflies and anticipation with the newly awakened Smaug.

The trailer climaxes three-quarters in with a flurry of drawstring-pulling, ax-swinging, sword-wielding action — 10 seconds of clip-matching genius — then dips to black as a deep thunder rolls in the darkened theater. “Was that an earthquake?” one terrified dwarf asks. “That, my lad…” begins Balin (Ken Stott), lingering long enough for the camera to circle around for a trailer-perfect closeup, “…was a dragon.” It would have been a perfect place for this first teaser to end. Instead, the clip runs 20 more seconds, wrapping with two shots of boring old Bilbo trying to hide from Smaug … who looks like far less of an attraction than the preceding stretch of CG-enhanced fantasy footage.