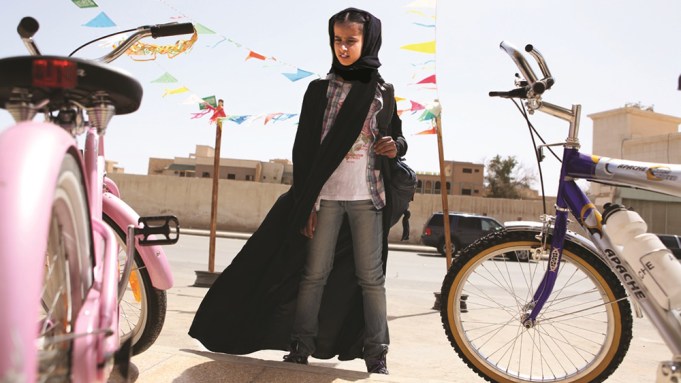 Saudi Arabia has selected Haifaa Al Mansour’s “Wadjda,” the first Saudi Arabian feature shot entirely within the kingdom and, also notably, one directed by a woman, as its entry for foreign language film for the 2014 Academy Awards — the first-ever entry from that country.

“We are very proud of the film as an authentic representation of our country and culture, and are very pleased to see the themes and story of the film resonate with audiences well beyond our borders,” said Sultan AI Bazie, head of the nominating committee.

“Wadjda,” produced by Roman Paul and Gerhard Meixner, premiered a year ago at the Venice Film Festival and debuted in North America at the 2012 Telluride Film Festival.

Film centers on the title character, a 10-year-old girl who challenges Saudi traditions in a determined quest to buy a bicycle. When stymied, she sees one last chance in her school’s Koran recitation competition and wins the large cash prize for first place.

“Once the novelty is processed, critics and the public will likely agree that the pic transcends mere surprise value and delivers a winning, handsomely crafted story with a charismatic lead guaranteed to charm international auds,” Weissberg wrote. “Resembling kid-centered Iranian pics that tackle sticky topics via pint-sized protags, ‘Wadjda’ uses a spunky girl to explore women’s limitations within Arabian society.”