Actress was known for roles in such aquatic spectaculars as 'Bathing Beauty,' 'Million Dollar Mermaids' 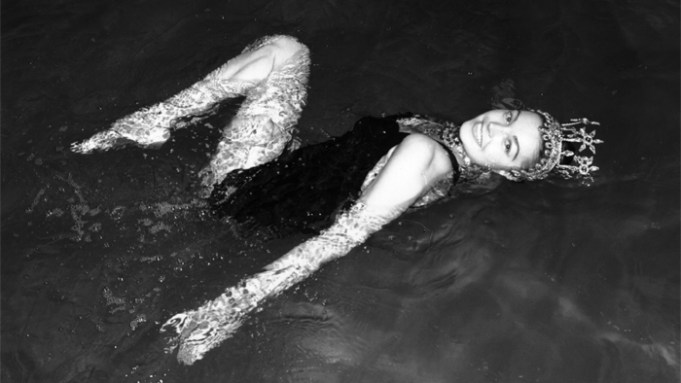 Esther Williams, the swim champion turned actress who was known for roles in MGM aquatic spectaculars such as “Bathing Beauty” and “Million Dollar Mermaid,” died Thursday in Beverly Hills. She was 91.

Williams died “peacefully in her sleep,” according to family rep Harlan Boll.

Popular in the 1940s and ’50s for her easy, amiable manner and aquatic abilities, Williams was a shrewd businesswoman who made a series of wise investments for the days after her decade or so of fame had ended, lending her name to swimming pools and bathing suits. Except for occasional commentary at swimming events like the Olympics or instructional video tapes, Williams largely retired after the mid-’60s.

But while she was on top, she was one of MGM’s most colorful stars, appearing in hit films including 1945’s “Thrill of Romance” and “Easy to Wed,” two of several outings with co-star Van Johnson. By the late-’40s she was one of the top 10 moneymakers in Hollywood.

She frequently swam in her films, echoing the famous Fanny Brice remark “Wet she is a star. Dry, she ain’t.” And Williams admitted she could not act, sing or dance. But her easy California looks, winning smile and aquatic abilities were enough for post-war American audiences. Many of her films were profitable for MGM, and she was a cover girl on countless magazines.

A Los Angeles native, Williams grew up swimming and surfing. Her first job at the age of eight was counting towels at a Inglewood public pool. She began competing in local swim events and by the age of 14 was winning regional events. At age 16, she repped the Los Angeles Athletic Club swim team and earned three national championships for the breaststroke and freestyle. But her hopes of becoming an Olympic medalist were dashed when the 1940 Tokyo Summer Olympics were cancelled in the shadow of WWII.

The media coverage she received for her swim triumphs brought the tall, leggy Williams to the attention of showman Bill Rose. Out of a casting call of more than 100 hopefuls, Rose tapped her to star opposite Johnny Weismuller in his “San Francisco Aquacade Review.”

MGM execs eventually offered her a screen test, and she was signed to a contract by Louis B. Mayer in October 1941. She made her screen debut alongside Mickey Rooney in “Andy Hardy’s Double Life,” in which she planted the first kiss on Rooney’s All-American hero.

At MGM, Williams showed off her swimming skills in a series of water spectaculars including “Bathing Beauty,” “Neptune’s Daughter,” and “Million Dollar Mermaid.”  A special 90-foot square, 20-foot deep pool was built at Stage 30 on the MGM lot, complete with hydraulic lifts, hidden air hoses and special camera cranes for overhead shots for Williams’ unique brand of aqua-musicals. Busby Berkley designed some of her pics’ lavish production numbers. She ultimately starred in 25 pics for the Lion.

“No one had ever done a swimming movie before,” Williams said, “so we just made it up as we went along. I ad-libbed all my own underwater movements.”

Williams’ first above-the-title billing came in the musical “Fiesta” opposite Ricardo Montalban. She was still in the swim through the end of the decade in such films as “This Time for Keeps,” “On an Island With You,” “Take Me Out to the Ball Game,” “Duchess of Idaho” and “Pagan Love Song.” Efforts to take her out of the water in “Texas Carnival” and “Skirts Ahoy” didn’t work, so in 1952, she starred in the biographical film “Million Dollar Mermaid” as Australian swimmer Annette Kellerman. It was followed by “Dangerous When Wet,” “Easy to Love” and 1955’s “Jupiter’s Darling,” the last of her MGM films.

Williams starred with Jeff Chandler in the drama “Raw Wind in Eden” in 1958 and then with Cliff Robertson in 1961’s “The Big Show.” Her last film, “The Magic Fountain,” was directed by her future third husband, Fernando Lamas, whom she married in 1969.

She settled into domestic life and charity work for the rest of her years, with an occasional break for interviews in documentaries such as “That’s Entertainment III” and “Busby Berkeley: Going Through the Roof.”

Williams also had a big influence on the swimwear biz through her signature Esther Williams Swimsuit Collection. Working with her noted costume designer, Irene, on the wardrobe for 1944’s “Bathing Beauty,” Williams pushed for stretchy latex fabric to be used in her suit instead of the heavy woven fabrics used at the time.  Williams continued her involvement with designing swimwear in all of her subsequent films.

Williams was marrried four times. Her third marriage to thesp Fernando Lamas lasted from 1969 until his death in 1982. She wed Edward Bell in 1994. In addition to Bell, her survivors include two children and three grandchildren.

The family requests that donations be made to the International Swimming Hall of Fame in Fort Lauderdale, Fla.

(Carmel Dagan contributed to this report.)