Katy Perry, Britney Spears Take the Cake for ‘The Smurfs 2’ 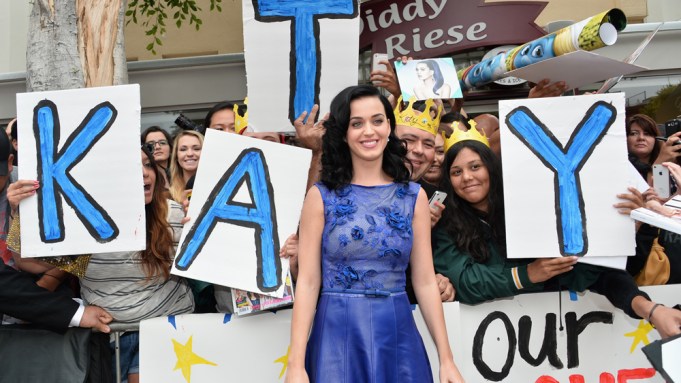 July 28 was a very big day for some very little blue creatures as the Smurfs took over Westwood’s Regency Village Theatre and 161 other theaters worldwide for “Super Smurf Sunday.”

Katy Perry, Neil Patrick Harris, George Lopez and Jayma Mays were among the sequel’s stars who walked down a massive blue carpet for the L.A. preem, while Hank Azaria and “Smurfs” franchise newcomer Christina Ricci held down the fort in New York.

A tree-high inflatable Smurf towered over festivities at the top of the carpet, while trendy tikes hobnobbed with actors in Smurf suits all the way down Broxton Ave.

Everyone from Britney Spears (who provided an original tune for the flick) and producer Jordan Kerner to Perry and her grandmother, Ann Hudson, were decked out in Smurfy blue accoutrements. Hudson’s graphic shirt dished a dirty little secret: “I’ve got the hots for Papa Smurf.”

And if that wasn’t enough to turn Westwood into a bona fide Smurf Village, the “Ace of Cakes” himself, Duff Goodman, provided a sweet treat to seal the deal: a 200-lb “smurfberry” cake, complete with fondant Smurfette and Naughties to boot.

According to Goodman, though, all of the spectacle is secondary to a blockbuster with more substance than you’d expect.

“It’s not just some Hollywood marketing machine,” he said. “There’s a very real story to this movie, a plot that will affect you whether you’re a kid or not.”

Helmer Raja Gosnell agreed: “This film is more nuanced [than the first installment.] It’s a more psychological story that digs into some real human emotions about what family means, what makes a family and how that can mean different things to different people.”

“The Smurfs 2” shines the spotlight on Smurfette (Perry), who finds herself torn between two fathers and two identities: evil roots with her creator, Gargamel, or a true blue life with her stepfather, Papa Smurf. Meanwhile in the live action, Harris’ character, Patrick struggles with his relationship with his own stepfather and the implications of having a biological father who left him as a young boy.

Harris says the themes of the film set it apart from most of today’s family fare: ‘It’s a pretty heady conversation to have for little kids who are coming to eat some popcorn and watch some Smurfs make fart jokes,” he said.

Kerner says the Smurfette origin story was an obvious next move for the series.

“The film answers the question of why just one female Smurf,” he said. Kerner says that’s the biggest question asked among devoted Smurf fans across the web.

“If there is a third movie, it would deal with the other questions: Why are they blue? Why 99 Smurfs? Why mushroom houses? That would be, as we call it, the authorized origin story.”

Just how authorized can a Smurf tale get? Kerner explained that the creative team spends at least an hour per week on the phone with the family of the original Belgian Smurf creator, Peyo.

“They’re really my audience,” he said.

Kerner first made a bid for the film rights to the comic back in 1997 after producing “George of the Jungle.” The Culliford family chose Kerner for his vision and enthusiasm, and have remained involved consultants on the films since they accepted Kerner’s offer in 2002. The family was in attendance at the day-and-date premiere in Belgium.