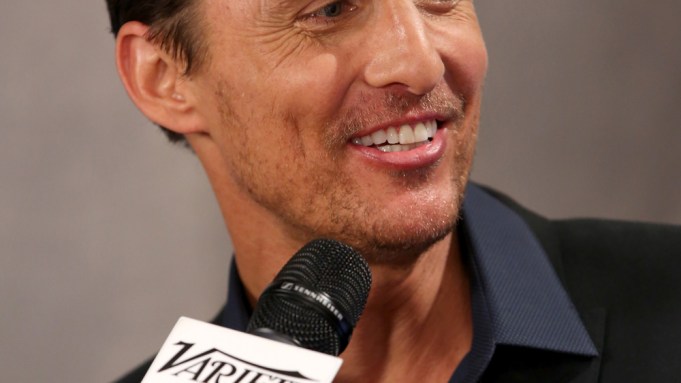 Not so long ago, two-time Oscar nominee Jessica Chastain, lest we forget, was an actress just trying to make her way into the business.

The experience of making the upcoming two-part film, “The Disappearance of Eleanor Rigby,” captures both her Hollywood beginnings and just how far she’s come.

“This goes back to 10 years ago,” Chastain said at the Variety Studio in Toronto on Monday. “I had won tickets to the Malibu Film Festival, when I first moved to Los Angeles. I was very excited. And I went to see the short films. There was an incredible short, just wonderful, and the actor and director were in the lobby (after) — it was Ned Benson. So I ran up to him and I said, ‘My name’s Jessica. I really want to work with you someday. Can I have my manager send you my reel?’ And then we became friends.

“It’s an emotional thing, because it’s like a dream come true remembering all of us as friends, hoping someday that we would be in the film industry and work together. And today we’re premiering it for the world, and it’s very sweet.”

“Disappearance” is divided into two parts, “Him” and “Her,” that can be seen together or separately in either order. The film is being shown in different fashions at the Toronto International Film Festival.

“The story came from just from the fact that I really just wanted to write a love story,” writer-director Benson said, “and when Jess had read that (initial) script, we started talking about the character and who that character was, and it sort of gave us the idea to try the other side of the story.”

McAvoy originally resisted doing the film, but the timing of it moving forward eventually ended up being serendipitous.

“Ned sent it to me three years ago,” McAvoy said, “and for reasons I won’t go into because it would give something important away about the story, it was at a time in my life when I could not even countenance even taking part in a film that was about this particular thing that this particular couple are going through. It was very near to me at that time in my life.

“And then two years later, another actor called Joel Edgerton was doing it, and he dropped out. Why, I don’t know — he’s out of his mind. He’s crazy not to want to work with these two,” McAvoy joked. “No, I’m sure there were real reasons. Ned sent it to me again, and it wasn’t so near to me anymore, and this amazingly sophisticated view on adult love really connected with me in a way that wasn’t scary anymore, but beautiful. And really about the trauma that we can do to each other … through love. And I thought that was really beautiful and touching.”