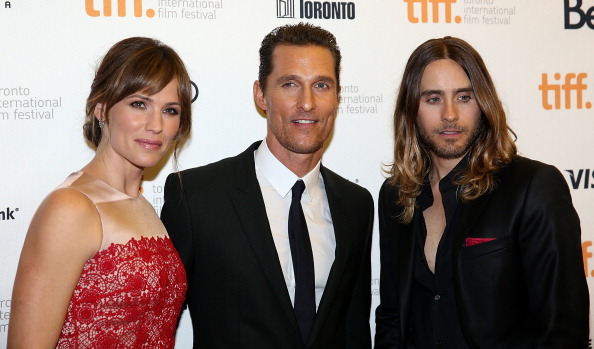 Though Matthew McConaughey is drawing fervent praise for his performance in “Dallas Buyers Club” after its Saturday premiere at the Toronto International Film Festival, the revelation is Jared Leto, appearing in his first film in six years.

Talking on Sunday about the reaction to the film and his multi-layered performance as a transsexual at the Variety Studio, Leto remained in disbelief.

“I don’t think I would have done it if it was a couple of years ago,” said Leto, who spent time focusing on other endeavors including music since last appearing onscreen as Mark David Chapman in 2007’s “Chapter 27.” My head wasn’t in the right place. I feel blessed to be a part of it.”

Leto turned to director Jean-Marc Vallee and told a story he wasn’t sure the helmer was aware of.

“I don’t know if I told you this — but I tried to push it away,” Leto recalled. “There was this meeting we had on Skype. I’m in Berlin, I’m playing a show … and I’m like, ‘Yeah, I’m going to have this meeting, and then I’m going to turn it down.’

“It did come at an interesting time. … To me, it’s so serendipitous. It’s so weird. My mind’s blown at what’s going on.”

Leto and McConaughey discussed the contrast between how frequently the film’s lead has been working (“Magic Mike,” “Mud”) and Leto’s return from half a decade away.

“I’m curious about how you did it,” McConaughey said to Leto. “It helps me to go work back-to-back-to-back … and if I haven’t for a while, it takes me a while to get my legs back. You came in after six years. .. I might have come in after six years and (tried) to really make something count, but you just held it.”

Said Leto: “I think the experiences away made me a better actor. I think that I grew. I saw a sunrise in Lebanon. I saw a sunset in China. I had all kinds of interesting conversations … I think I grew up a lot.

“I think creativity is creativity, no matter what you’re doing. If you’re taking a photograph, or making a play, or directing a film — it all comes from the same place. So I was certainly being creative.”

With all the elements coming together so well, “Dallas Buyers Club” now seems like a slam dunk to have been made, belying its 20-year endurance test to get to the screen. McConaughey said the logline of “period HIV drama” was a lot to overcome, no matter how strong the Craig Borten-Melisa Wallack script was.

“You knew you were going to get sort of a film that had some import to it, that felt like, ‘Hey, this is going to be good medicine — I should go see this.’ You get that with a lot of independent film. But what we got out of it (and) part of what it makes it feel like a slam dunk (now) was no one knew that it was going to be highly entertaining.

“People were saying (today), ‘It’s so funny. I laughed so many times,’ and it allows that. ‘I think no one could really see through that even on the page before we made it. “