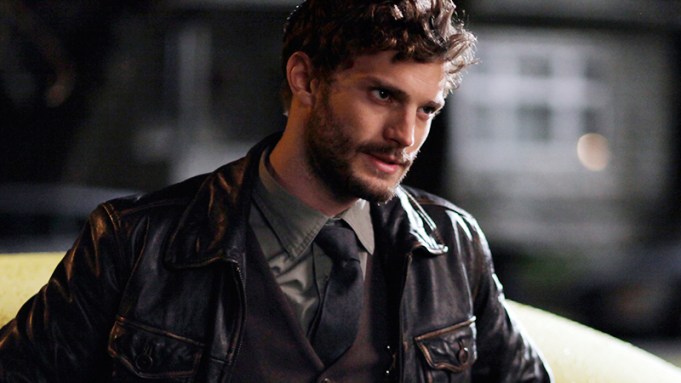 Northern Irish actor Jamie Dornan has been tapped to replace Charlie Hunnam as Christian Grey in the Universal and Focus adaptation of “Fifty Shades of Grey.”

Dornan plays Sheriff Graham Humbert in ABC series “Once Upon a Time”; he’s also played a serial killer in BBC Two crime drama “The Fall,” and he appeared in Sofia Coppola’s “Marie Antoinette.” The 31-year-old thesp performs in an Irish folk duo and has modeled for Calvin Klein, Christian Dior and Armani. His modeling experience may be useful, as the part will require him to act in explicitly sexual scenes.

Dakota Johnson will co-star as Anastasia Steele, with Sam Taylor-Johnson on board to direct.

The project was hit with a huge curveball when Hunnam departed after being attached for just a month. Universal said Hunnam’s exit was due to scheduling issues with “Sons of Anarchy” and upcoming movie “Crimson Peak,” but some sources said battles over a rewrite and the actor’s doubts about the role may have played a part in his decision.

When Hunnam exited, U and Focus execs decided to go for more of a discovery and brought in Dornan and Billy Magnussen to test with Johnson last Friday. Though the studio considered bringing in more actors to test, as of Wednesday morning sources said no one else had been brought in.

Universal will now work quickly to land thesps for the remaining supporting roles that include Steele’s roommate Kate, a role for which U had already been testing actresses prior to Hunnam’s exit.

Michael De Luca is on to produce the adaptation of E.L. James’ sexy bestseller, which is set to bow Aug. 1, 2014.

Dornan is repped by UTA and United Agents.