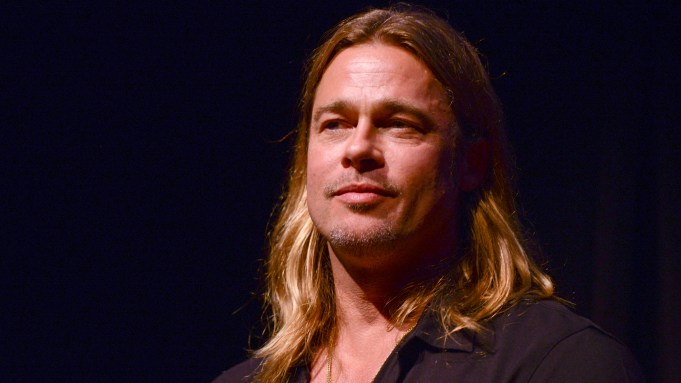 Brad Pitt may be one of Hollywood’s recognizable faces but it’s his work off-camera that’s keeping his career ticking at an alarming rate.

“12 Years a Slave,” the 19th century drama from director Steve McQueen, has garnered Oscar buzz after receiving not one but two standing ovations in less than a week, the latest at the Toronto Film Festival on Friday.

“It’s pretty special,” Brad Pitt said of the strong reaction to the drama, which the actor not only co-starred in but also produced through his Plan B banner.

“It’s one of those rare moments where story, performance and storytelling come together at the level,” he added from the Variety Studio. “We’re very proud of it.”

Starring Chiwetel Ejiofor and Michael Fassbender, “12 Years a Slave” is based on the novel by John Ridley and tells the true story of Solomon Northrop, a free black man who was kidnapped and sold into slavery in the 1840s.

“Ultimately what it’s reminding us is our responsibility to take care of each other,” he said of the film’s civil themes.

Producer Jeremy Kleiner, co-president of Plan B, initially reached out to McQueen, along with Pitt and Plan B’s Dede Gardner, after the director’s first feature “Hunger” and asked him what he’d like to do next.

“The fact that there hadn’t been more films about slavery didn’t make sense for him,” Kleiner said, which led to McQueen’s wife stumbling upon the book.

“Our early mandate was to work with directors and storytellers we found complex and (who) might need a little help getting over the hill,” Pitt said of his company.

Gardner, who helped oversee production on the shoot, said the goal for Plan B and Fox Searchlight was always simple: to make it bullet-proof.

“From the beginning the idea was to get the movie far enough down the field to make it undeniable, to get it to a point where no one could poke holes in it,” she said.

So far, they’ve managed to do just that.