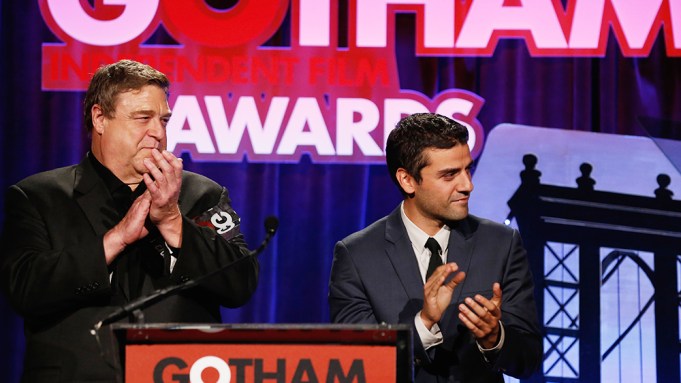 The Gotham Independent Awards, the annual New York event that kicks off awards season, looked more like the Oscars this year — or at least the star-studded Independent Spirit Awards — with a roster of attendees that included Forest Whitaker, Ethan Hawke, Jared Leto and Shailene Woodley.

But unlike so many other awards shows intent on predicting future Oscar winners, the ceremony sponsored by Independent Filmmaker Project stayed true to its roots by honoring a batch of quirkier winners.

Joel and Ethan Coen’s “Inside Llewyn Davis,” a musical comedy starring Oscar Isaac, won best film. “Twelve Years a Slave,” which was nominated for the most (four) Gothams and is considered the Academy Awards frontrunner, was completely shut out of the gala at Manhattan’s Cipriani Wall Street. It even lost the night’s audience award to “Jake Shimabukuro: Life on Four Strings,” a little-seen documentary about a ukelele virtuoso.

“I was not expecting this,” began Larson’s breathless acceptance speech, which included thanks to her stepdad “for floating me money when I couldn’t pay the rent.”

The Oscar tea-leaf readers like to point out that the Gotham winners are decided by small panelists of independent film aficionados, not a widely cast ballot, but the well-attended ceremony still makes an impression in the competitive awards season calendar packed with lunches and Q&As.

McConaughey, even though he wasn’t there, scored major points with one of the best gags of the night. His costar Leto accepted the award on his behalf –“Matthew happens to be one of the few actors working today,” Leto explained — and then held up his iPhone on speaker. It was McConaughey on the other line.

“Can you hear anything?” Leto asked McConaughey, who sounded garbled. “This is terrible. I have to interrupt,” said Leto, who then finished his speech for him.

One of the low points in the evening was the opening monologue by host and comedian Nick Kroll, who bombed by trying to poke fun at the indie world that the evening was meant to celebrate.

“Trying to write a joke about ’12 Years a Slave’ was about as fun as it was to watch ’12 Years a Slave,’” Kroll said. Of its star Michael Fassbender, he said, “To truly understand the pain and suffering we can inflict on each other, all he had to do was watch ‘The Counselor.’” When nobody laughed, he shuffled awkwardly onstage. “C’mon, guys.”

The ceremony kicked off with a career tribute award for New York City film commissioner Katherine Oliver presented by Mayor Michael Bloomberg, who talked about how New York had grown more welcoming to filmmakers over his tenure. “In 2002, when a movie was produced about my predecessor Rudy Giuliani, it was actually filmed in Montreal,” said Bloomberg. He expressed confidence that when a film was made about him, it would be shot in New York (and cracked that George Clooney would be “perfect casting”).

The James Gandolfini tribute was presented by Steve Buscemi. Buscemi, who directed him in “The Sopranos” and worked with him on “The Incredible Burt Wonderstone” and “Romance and Cigarettes,” fought back tears as he honored the late actor during the tribute award.

“I cherished working with him and I’ll miss him forever,” he said, welling up. “Tony Soprano didn’t come easy to him. He couldn’t turn it on and off, and he sometimes resisted going to the places he needed to go.”

His wife Deborah Lin and son Michael accepted the award. “I know if he was here tonight, he’d be very proud and humbled,” Lin said.

Forest Whitaker’s tribute was presented by his “Butler” director Lee Daniels. Whitaker said that as an actor, he’s on a perpetual search for truth: “I stand there and I realize the truth continues to expand and grow, and I grow,” he explained.

Richard Linklater’s career tribute was presented by his “Before” trilogy actors Julie Delpy and Ethan Hawke. “He holds ordinary moments as sacred,” said Hawke, who pointed out that Linklater’s been sponsoring an “awesome” film society for the past 25 years. “We might do a fourth one maybe, one day,” said Delpy.

“Independent film was always New York for me,” said Linklater, describing how he came of age when Jim Jarmusch, Spike Lee and the Coen brothers were getting their start.

On the red carpet before the show, best actress nominee Shailene Woodley talked about the two years she waited to make “The Spectacular Now.”

“To be completely honest, being here, this awards show is the best awards show of the seaon in my opinion,” she said. “It’s so chill and everyone is paying attention to small movies that take a lot of work to get made.”