Part museum and theme park attraction, Legendary event reveals more faithful design of Godzilla for its film, out in May 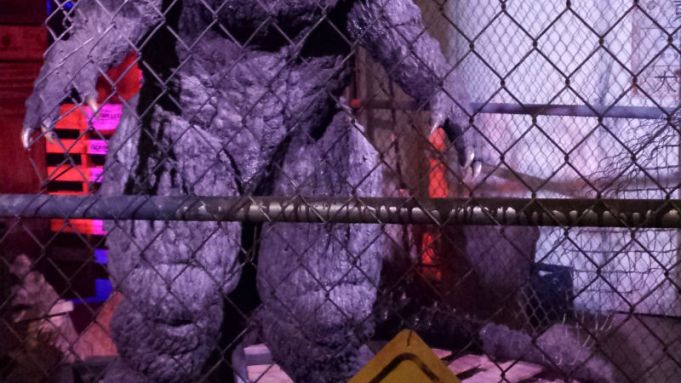 The first official footage of Legendary Pictures and Warner Bros.’ “Godzilla” won’t be shown at Comic-Con until Saturday, but those visiting the “Godzilla Encounter” throughout the week, will come pretty close to seeing what the giant fire-breathing lizard will look like on the big screen.

Legendary opens the attraction today, in a building on the corner of 7th Avenue and J Street, in San Diego’s Gaslamp Quarter, that walks guests through a highly detailed mock up of a Tokyo street, complete with a ramen bar, as the exhibit looks back at the iconic Japanese character’s 60-year history — from the first costume to various toys, comicbooks, art, apparel and movies.

Alarm bells then go off and the military hurries guests through various other themed rooms, including a scientific facility and elevator, to get them out of danger from a rampaging Godzilla, which has emerged from the sea and is stomping through San Diego (according to news reports playing on screens).

Final room finds visitors inside and office building where they come face to face with Godzilla stomping through the city during a rain storm as he stops to peer into the windows of the room.

Sequence shown does not appear in the final film, out May 16, 2014, according to Legendary and “Godzilla Encounter” designers Five33. The look of Godzilla will also change somewhat, but it’s close to the final version, which differs greatly from Roland Emmerich’s beast in 1998 and more closely resembles the Japanese original, designed by Eli Tsuburaya. It’s a more faithful design that hardcore Godzilla fans will approve.

SEE ALSO: ‘Godzilla’ Ready to Roar at Comic-Con as Legendary Promotes Its Next Creature Feature

With its “Godzilla Encounter,” Five33 cleverly sets the stage for what Legendary is hoping to get in theaters with its “Godzilla” next year. The space at Comic-Con clearly respects the history of the character and lovingly offers Godzilla fans a look at his role in pop culture in a well-designed museum setting that quickly turns into a theme park attraction, albeit brief one.

Notable items on display: The first suit used in the “Godzilla” movies; the rarest Godzilla toy figure; a street artist mural of Godzilla-designer Eiji Tsuburaya (see below); the original Oxygen Destroyer prop from the 1954 film; Shindo’s Ramen Bar, a nod to 1991’s “Godzilla vs. King Ghidorah, with menus listing food items named after the monsters in the “Godzilla” films; and Godzilla-shaped origami in a bowl at the bar.

If there’s any downside to what’s been developed, it’s that visitors will want to spend more time examining the smallest of details and references or looking at the rare toys and collectibles on display.