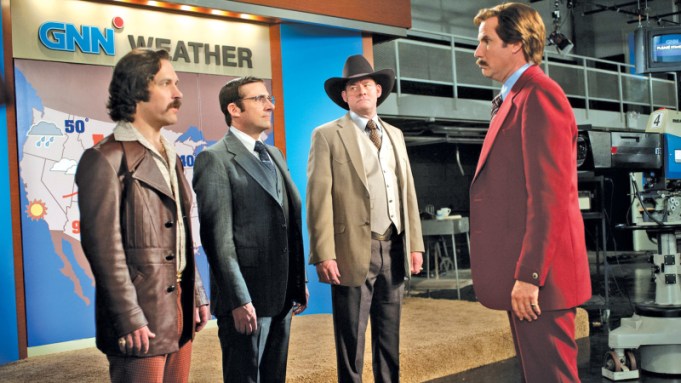 More Hobbits and “Hunger Games,” more “Anchorman” and more “Thor” will feed filmgoers thirsting for the familiar through the end of the year. But with the summer reaching benchmark box office levels, fall and winter movies will need to keep up strong momentum if Hollywood is to set a record in 2013.

So what pics are auds buzzing about?

Naturally, Lionsgate’s second “Hunger Games” installment, “Catching Fire,” tops the list of the most-talked about upcoming releases on social media, according to market research firm Fizziology. Of course, the “Thor” reboot and “Anchorman” sequel also rate high on the social media register. Surprisingly, Open Road’s sequel “Machete Kills,” with a cast that includes Lada Gaga, and the next Vin Diesel “Riddick” pic, driven by strong interest from Hispanics, are generating more heat online than the next “Hobbit.”

’Tis the season for challenging films and films with challenges. Here’s a few titles that have something to prove to audiences and what’s at stake for their financial backers.

THE CHALLENGE: British helmer Steve McQueen is beloved by film critics for his low-cost stylish films “Shame” and “Hunger,” but this star-powered movie with Brad Pitt and Benedict Cumberbatch will need plenty of attention from its debut at the Toronto film fest to gin up excitement for its theatrical run. The film’s violence is generating visceral reactions from test screenings. Can McQueen broaden his audience with “Slave”? (Fox Searchlight, Oct. 18, limited)

“Blue Is the Warmest Color”

THE CHALLENGE: It’s in French, it’s about a lesbian love affair and it’s rated NC-17. The Cannes Palme d’Or winner certainly has provocative elements, but questions remain about whether it will work better on VOD or can successfully buck the roadblocks that foreign-language films and NC-17 titles face in American cinemas. (IFC, Oct. 25, limited)

THE CHALLENGE: Fanboys who grew up on Orson Scott Card’s speculative novels were put off when Card started speaking out against same-sex marriage and other hot-button issues. Many fans have said they won’t pay to see the film despite waiting years for the bigscreen adaptation. Will they really not show up, or is this strictly a blogosphere backlash? (Lionsgate, Nov. 1, wide)

THE CHALLENGE: Alfonso Cuaron’s first film in seven years is being described as “Cast Away” in space. Sandra Bullock’s near-solo performance will have to carry the 3D exploration of isolation in space. (Warner Bros., Nov. 24, wide)

THE CHALLENGE: It’s looking like an extremely strong year for African-American films, and there’s a big play for the faith-based audience with this Christmas tuner directed by Kasi Lemmons. But not all musicals pull in “Chicago”-sized numbers (think “Rock of Ages”), so Fox Searchlight has to hope for the kind of crossover success it had with “Black Swan.” (Fox Searchlight, Nov. 27,
wide)

THE CHALLENGE: Spike Lee is angling for his first hit since 2006’s “Inside Man” with this remake of Chan-wook Park’s unflinching 2003 pic about a man held for 20 years in solitary confinement. Early footage and stills are striking and social media interest is high, but this ain’t exactly easy subject matter and Lee has to prove to audiences that he can still “do the right thing.” (FilmDistrict, Nov. 27, wide)

Exhibitors are optimistic that the year’s remaining releases offer enough diversity to match or bust those figures.

“Going through the next couple of months, there are lot of different genres that should appeal to different audiences,” says Asa Allen, a film buyer for New Mexico circuit Allen Theaters.

The fall slate faces a high bar set last year, when “Skyfall,” “The Hobbit: An Unexpected Journey” and the “Twilight” finale each grossed around $300 million domestically. Last year’s holiday season was one of the most crowded ever, and distribs have again packed the sked.

“There’s a pretty good lineup on the independent side,” says Landmark Theaters CEO Ted Mundorff. “A lot of them could go wider.”