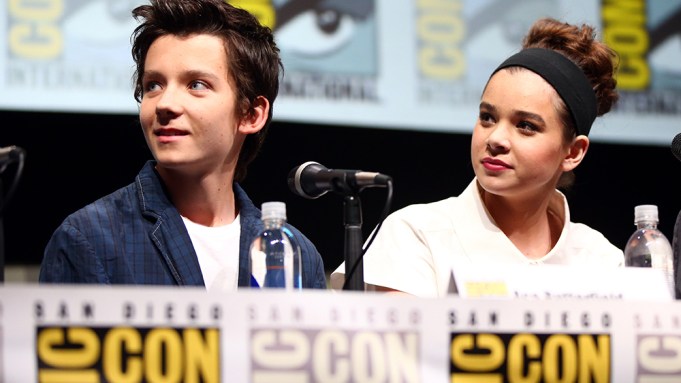 When brought up during a Q&A session during Summit’s Comic-Con presentation for the film, Orci said, “The truth is you never want to court controversy, but we decided to use the attention on us to support Lionsgate’s statement of support of LGBT rights. So rather than shy away, we are happy to embrace it and use the spotlight to say we support LGBT rights.”

Hood backed up the producer, saying that the film has themes of “compassion” and “empathy” “and I hope I’ve delivered that” to the 6,000 filling the San Diego Convention Center’s massive Hall H.

A campaign to boycott the film sprung up last week after Card expressed his views against gay marriage. Summit were quick to distance itself from his opinions.

“The simple fact is that neither the underlying book nor the film itself reflect these views in any way, shape or form,” the companies said in a statement. “On the contrary, the film not only transports viewers to an entertaining and action-filled world, but it does so with positive and inspiring characters who ultimately deliver an ennobling and life-affirming message.”

The panel presented new footage for the film, which played well to the audience, and brought out Harrison Ford, Hailee Steinfeld and Asa Butterfield to join Hood and Orci. Outside of the Card controversy, the panel was light-hearted, with Hood especially winning over the packed house during his first trip to Comic-Con.

For example, when asked which prop he would keep from “Ender’s Game,” Hood said he would take Ford.

Ford had some fun with his fans, including panel moderator Chris Hardwick, of Nerdist Industries.

In one jokingly heated exchange, Ford quipped to Hardwick: “I am never coming back here again.” This year marks Ford’s second time at Comic-Con after promoting “Cowboys & Aliens.”

When asked by one Brazilian fan if Ford ever dreamed of Indiana Jones, the actor responded, “You and I have a lot in common. I used to dream about Indiana Jones a lot. Not so much anymore.”