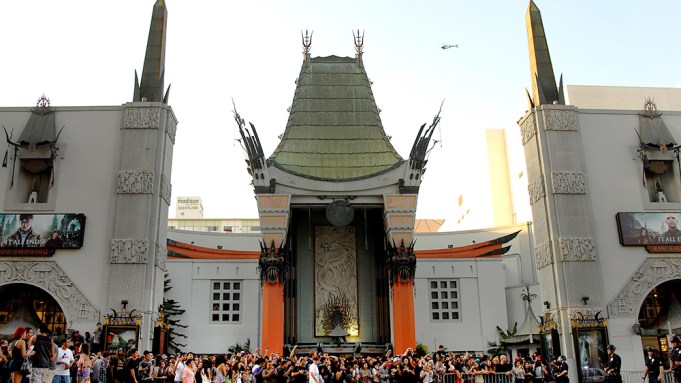 The management of the TCL Chinese Theater gave press a sneak peak of the venue Monday and showed off a startling transformation of the historic space.

A giant curved silver Imax screen hangs at the front of an orchestra section that has been reconfigured literally from the ground up: The original floor itself has been partially demolished and replaced with swooping stadium seating that extends much lower than before.

“It’s grand and it’s regal. There’s no place in the world where a premiere feels as it does here,” Alwyn Hight Kushner, president and chief operating officer of the TCL Chinese Theaters, told Variety. And with the new seating and its other upgrades, Kushner said, the Chinese will be pursuing premieres — Imax and non-Imax alike.

The renovated theater will open to the public on Sept. 20 with the restored, Imax 3D-converted “The Wizard of Oz,” and longtime patrons of the Chinese may find their entrance to the new house as bewildering as Dorothy’s egress to Oz.

Gone is the gentle slope of the old orchestra seating, replaced by stadium seating. The rake is not as steep as that at some purpose-built Imax theaters but it is far steeper than before. To extend seating forward and and below the original floor, the builders had to demolish the old floor, then dig through the theater’s basement and into the soil below. The front of the house now extends well below the famous columns that flank the orchestra, while the rear covers up parts of those columns.

More familiar is the original grand drape, with its unique scarlet-and-gold design, which has been retained — making the Chinese the only Imax theater in the world with a curtain. The curtain is not as tall as the new screen, so new valances for masking have been installed. Behind the curtain, the 94′ x 46′ screen, the third-largest commercial Imax screen in North America, has been moved down to the lowermost floor level. And with 932 seats, the Chinese becomes the largest Imax theater in the world, by seating capacity.

As part of the renovation, which began in early May, the interior has been cleaned, touched up and repaired, and new LED lighting has been installed that can change color according to the mood of the picture to be shown – a feature Sid Graumann had in the Chinese when it opened but long since abandoned.  The new lighting also reveals aspects of the decor that were previously hidden.

“The center chandelier wasn’t lit very well at all,” said Kushner. “We’ve repainted and restored a lot of aspects of it that were damaged. We’re shining light on all of it that so you can actually see all the detail that’s there.”

Few moviegoers are likely to miss the old seats at the Chinese, which were cramped and dated. The new seats are larger, have more legroom and offer the usual amenities of modern theaters: cup holders and some ability to recline or rock.  They have a scalloped design that fits with the original decoration, with wood backs instead of the usual plastic, adding to the elegance of the room.

“There’s been a lot of attention to detail that contributes to the overall feel of the room when you walk in,” said Kushner.

In an echo of the old layout, there is an elliptical open space between the screen and the first row of seats big enough for an orchestra. The Chinese once had a full stage and orchestra pit, and in the various renovations over the years it kept a performance space between the screen and first rows of seats, but performances sometimes required the first two rows of seats be removed; that will no longer be the case. Theater management is expecting that space to be used for special events including Q&A’s, press conferences and occasional concerts.  A new green room behind the screen, still getting its finishing touches, will serve performers using the space.

Behind the scenes, the Imax technology now deployed in the theater promises a considerable upgrade in both picture and sound. A new Imax projection booth has been installed below the old booth, with two 2K Imax Digital projectors. The theater is to be one of the first to get Imax laser projectors when the company deploys that tech in late 2014. The theater will get an additional sound upgrade at that time.

The old booth now has two 4K Christie Digital projectors for non-Imax shows. The 35mm projector, favored by such directors as Christopher Nolan, has been removed, but there is room in the booth for one to be re-installed if it is needed for a special presentation.

Graumann’s Chinese opened in the silent era and its acoustics were long substandard.  Kushner said the conversion to stadium seating improved the acoustics. “A lot of sound was bouncing off the back wall; it’s now a much smaller back wall. The acoustical engineers and consultants have advised us it inherently makes the room better.” Beyond that, hidden acoustical enhancements have tuned the theater to Imax’s specifications, and custom-built speakers, designed specifically for the Chinese Theater, have been installed around the theater.

The Imax tech includes microphones in the theater that monitor the performance of the sound system and automatic systems compensate for changes in temperature, the size of the crowd and other fluctuations, minute by minute.

The theater’s management expects to show different Imax pictures, including documentaries, at different dayparts, so they can continue to accommodate the flow of tours during the day. The Chinese Theater gets some 20,000 tourist visits daily.

Kushner said the venue will also hosting events that will boost its own profile and that of if TCL, the Chinese consumer electronics company that bought the naming rights to what had been Graumann’s Chinese. “There are certain events TCL might have held in China, certain launches and film festival announcements,” said Kushner, “so there are some events that will be coming up in the next few months which will help bring a spotlight here.”

Find coverage of the Chinese here and here.