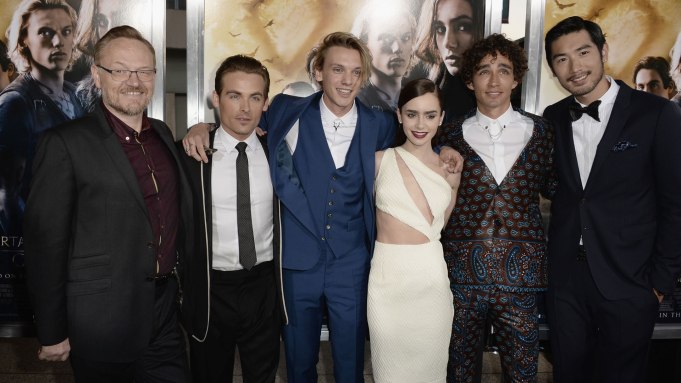 Fans of Cassandra Clare‘s books had plenty to cheer about at the Aug. 12 premiere of “The Mortal Instruments: City of Bones” at Hollywood’s Cinerama Dome.

“Once I started working on the movie, I checked out the fan art,” said director Harald Zwart. “There are so many clever artists out there, and they draw all these great ideas. Not that I’m ripping them off, but I’m getting inspired by them.”

Apparently that inspiration met the approval of the book’s author, who walked the red carpet with stars Lily Collins and Jamie Campbell Bower. Clare said that just touching the props on set brought her to tears. “Harald came over and he was like, ‘What’s wrong? Is it bad? Do you want us to redo it? You’re crying!’”

The film stars Collins as a teenager who finds out that she is more than human and is thrown into a world fighting demons, werewolves, vampires and more.

“Most of my fight scenes were shot at 4 o’clock in the morning. I don’t know why I got the short end of the stick,” Bower said, laughing. “All of them were fun, but sweaty and hectic.”

Besides the challenging fight scenes, the actors faced the pressure of portraying the book’s beloved characters.

“It’s best to keep yourself out of that and just concentrate on what you’re doing,” said Robert Sheehan. “And not to think to yourself, ‘What I’m doing now is potentially being seen by millions of people.’ Because you will shit yourself. Right there on the spot. And that’s happened,” he said, “Not to me!”

Screen Gems’ “The Mortal Instruments: City of Bones” is set to release Aug. 21.