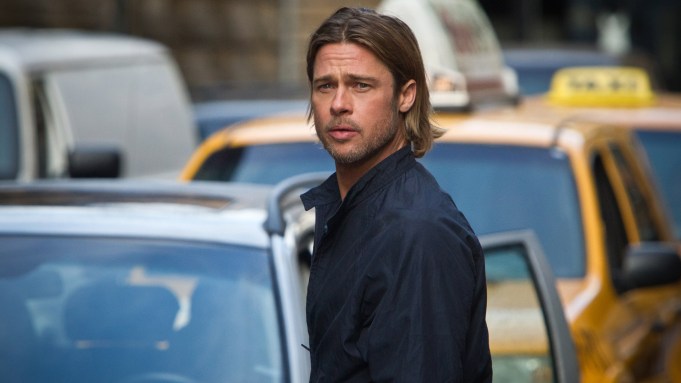 While promoting his new film, “12 Years a Slave,” at the Toronto Film Festival, Brad Pitt was asked whether or not a sequel to “World War Z” was in the works.

“We’re certainly talking about it, yes,” he told Variety.

“World War Z,” one of the highest grossing films of 2013 and Pitt’s most successful movie ever, was the recipient of bad buzz early prior to its release but, in a reversal of fortune, went on to earn a whopping $533 million at the worldwide box office.

“We have so many ideas on the table from the time we spent developing this thing and figuring out how the zombie worlds work,” Pitt said in a new interview with Variety.

“We gotta get the script right first to determine if we go further.”

Based on the 2006 novel by Max Brooks, the zombie blockbuster underwent a complete rewrite and reshoot of the third act, hiking up the budget to nearly $200 million but “World War Z,” insiders say, ultimately prevailed thanks to an aggressive marketing campaign and positive reviews.

Paramount is said to be leaning on Pitt, whose company Plan B produced the film, to make another feature as the “World War Z” property was initially envisioned as a three-part franchise.

“We have so many ideas and so much information–we think we have a lot of stuff to mine from,” Pitt said.

Mireille Enos, who is in Toronto promoting her new film “Devil’s Knot,” told Variety said she’s on board 100% for the sequels.

“We’ll wait and see how the script turns out but yes, I’d love to come back.”

As for whom will write the second “World War Z” script remains to be seen.

Until then, Pitt next co-stars in and produces Steve McQueen’s “12 Years a Slave,” out in limited release Oct. 18.