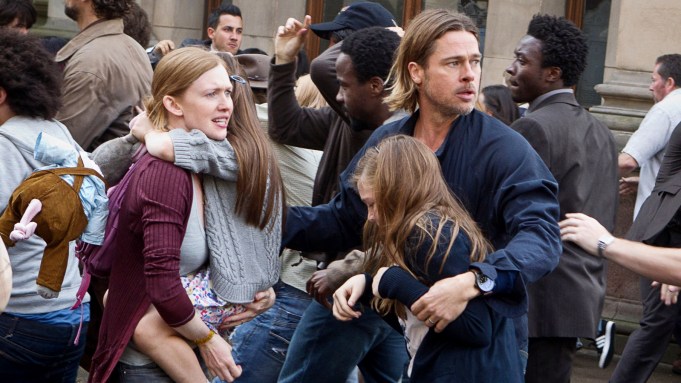 Paramount has started to amp its marketing for its big budget tentpole “World War Z” in the last couple weeks and its most recent element involved its star Brad Pitt making a surprise appearance at a New Jersey screening of film where Pitt introduced the film.

The footage was video taped by an audience member who clearly knew  Pitt was about to pop up given all the security at the screening and shows Pitt throwing out t-shirts and thanking the fans for coming to what he called “the most intense thing you’re going to see all summer.”

These types of appearances happen all the time (Robert Downey Jr. and Quentin Tarantino have done it for their films at the Arclight Cinemas in Hollywood during a handful of midnight screenings of their films) but this specific one comes at an interesting time.

The film is trying to overcome the bad buzz during the production regarding rewrites and reshoots that led many people to believe the film was in trouble but this idea to have Pitt show up at a random preview screening that isn’t in Gotham or Los Angeles is smart on Paramount’s part. Several blogs and web sites have already picked up the footage and in most cases have only had positive things to say which is exactly what this film needs even if the coverage has nothing to do with the actual film.