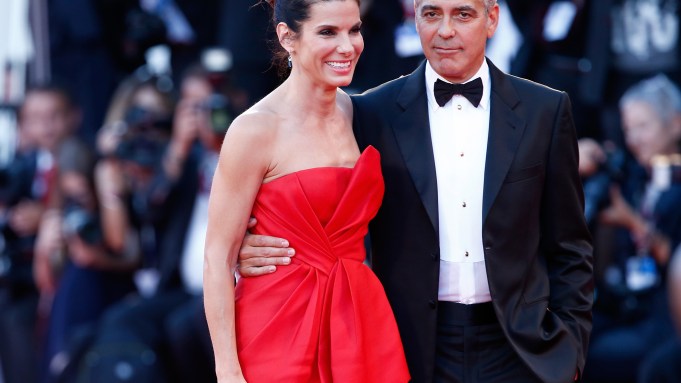 Clooney spent nearly a half hour before the opening ceremony signing autographs and posing for the cameras, followed by a glowing Bullock, who also spent quality time with the throngs of shrieking fans.

Cuaron and son Jonas, who co-penned “Gravity,” spent time on the red carpet along with producer David Heyman, and a delegation that included Warner Bros. Italy topper Barbara Salabe. The fest’s opener is unspooling in an out-of-competition slot.

During the somber pre-film ceremony, Biennale prexy Paolo Baratta said that for its 70th anni the Lido is looking at the future in various ways. He announced that the 1,000-seat Sala Darsena screening venue will be completely revamped next year, as part of the Lido’s long-lagging infrastructural improvements that now finally seem to be in progress.

Fest is also marking its 70th anniversary with the “Future Reloaded” initiative: 70 shorts on the future of filmmaking, each from a different auteur.

Two of the shorts screened during the ceremony: One by Bernardo Bertolucci, who is this year’s jury prexy, titled “Red Shoes,” about the helmer’s ongoing battle with Rome’s cobblestones as he tries to go around the city’s streets on his wheelchair; and the other by Paul Schrader, prexy of the Horizons jury, on the future of film in the digital age.

At a presser earlier in the day, Bertolucci said he would be looking for “movies that surprise me.”

During the ceremony the jury prexy also made a brief statement.

“I know that perhaps movies cannot change the world, but I think that cinema can create a world; that’s all I have to say,” Bertolucci said.

On paper this looks like a particularly strong edition of Venice. Artistic topper Alberto Barbera told Variety that he does not feel he missed out on much this year, with the notable exception of Steve McQueen’s “12 Years a Slave,” preeming in Toronto, and Paul Greengrass’ “Captain Phillips,” which will open the New York Film Festival. But Barbera ascribed their absences to marketing choices rather than to being snubbed.

Barbera also boasted that, after being static for decades, Venice is the festival that is changing the most both in terms of content and infrastructure, and vowed that in three years the fest’s digs will be “completely renewed.”