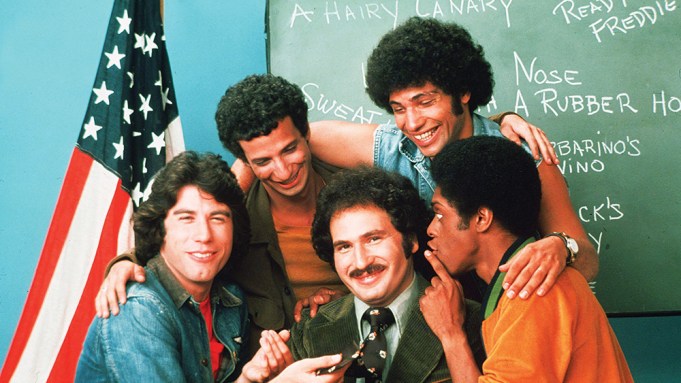 John Travolta remembers the last time he set foot on the grounds of France’s Deauville American Film Festival with great specificity — and well he should, as it was the first time he ever participated in a film festival.

The year was 1978, and Travolta was staying at director Claude Lelouche’s hotel in the tiny resort town in anticipation of the French premiere of “Grease” taking place at the festival. Four months prior he had made his first trip to France on a press tour, where he recalls first spotting the Time magazine cover bearing his face and the headline “Travolta Fever” on a newsstand in the Hotel du Cap gift shop. Needless to say, it was a memorable few months for the 24-year-old.

Thirty-five years and several career resurgences later, Travolta will once again be attending the festival, to collect a lifetime achievement honor as well as to stage a screening of his most recent film, “Killing Season,” in which he stars as a Serbian war veteran alongside Robert De Niro.

“I’ve been getting career awards since the mid-’90s,” the 59-year-old Travolta notes, pondering the span of a film career that has run for almost as long as the Deauville fest itself. “Your average career runs about 30 years, so I’m about five years past that. Clark Gable and Cary Grant were all still doing movies at my age and older, but they generally used to stop a lot younger. Now, you’ve got Eastwood, who’s 83 and still doing movies. Things are a little different now.”

Retirement ages aren’t the only things that have changed since Travolta’s last trip to the beaches of Lower Normandy. While Travolta’s previous Deauville appearance came in support of a film that remained in theaters for an eternity and grossed more than $180 million domestically, “Killing Season” received a brief theatrical release this summer before hitting VOD. It’s doing brisk business there, though Travolta admits he took some convincing to embrace the model.

“I asked some questions about it, to be honest, because it’s not something I’m used to,” he says. “Maybe I’m not as comfortable with it, but that doesn’t mean anything: Sometimes the world changes and you have to go with it.

“Besides, as an actor, it’s changed nothing. You’re there to do your due diligence and give a good performance. How the industry takes that forward is really up to them, and changing times will change that, but performance is performance.”

If Travolta ultimately takes a long view of the industry, it’s perhaps because he has served as a firsthand witness to so many seismic changes already. He became an established name during the twilight of the mogul-driven New Hollywood of the 1970s, finding steady work with Paramount just as the reigns of Charles Bluhdorn and Robert Evans were beginning to wane. After a fallow period in the more marketing-driven 1980s, Travolta again found himself at the center of the zeitgeist when “Pulp Fiction” kickstarted the independent film boom in the 1990s, and he served as a key muse for Hong Kong director John Woo while he was busy establishing a provisional beachhead for Asian filmmakers in Hollywood.

One doesn’t manage to maintain such a long, multifaceted career in moviemaking without growing wary of its inevitable paradigm shifts, yet Travolta is sanguine about Hollywood’s ability to continue producing what he calls “people movies” — the human-sized films that deal with actual characters, to which he still gravitates.

“James Bridges could still get a film made today, but it would be in this newer model,” he says. For example, “ ‘Urban Cowboy’ was made for $15 million in 1980; you’d probably make that today for $15 million too. But the difference, of course, is that $15 million used to be a lot more money, and in the ’90s, you’d probably have made it for $50 or $60 million. … These movies are still being made, but it’s just at a very adjusted price.”

This stoicism toward the packaging and the medium in which he delivers performances has served Travolta well, particularly in his early days, when he evolved from Broadway journeyman to TV heartthrob to Oscar-nominated movie star with rather dizzying speed. This would seem no mean feat — aside from Eastwood and Steve McQueen, Travolta was one of the first major stars to light up multiplexes unscathed by the stigma of television — yet Travolta insists the transition was an easy one.

Strangely enough, Travolta’s ticket to teen idoldom, “Welcome Back, Kotter,” was only issued after he narrowly missed winning the role of Larry Meadows in Hal Ashby’s “The Last Detail.” And even more strangely, it was his take on Vinnie Barbarino for the ABC skein that helped convince Brian De Palma to offer him his first major film role, in “Carrie.”

“I don’t know why that happened, other than there was a group of very important people around me who didn’t give a shit about those distinctions (between film and TV) during my transition.”

Another member of that group was New Yorker critic Pauline Kael, an early Travolta champion who praised his performances in “Saturday Night Fever” and TV movie “The Boy in the Plastic Bubble” alike, noting that the young thesp was a “character actor, looking like a leading man.” Asked about Kael’s diagnosis, Travolta is quick to agree.

“I know that’s what I am, because my interest level in being myself is very low,” he says. “I don’t feel like there’s any real particular style to my personality, other than as a neutral who’s ready to assume a style or personality or a set of attributes.”

Indeed, for all his celebrity, Travolta has never settled on a formula or default setting as an actor, and the essential “Travolta-ness” of his performances can be difficult to pinpoint. Sure, there’s the distinctive squinty smile, the lilting hoarseness to his voice, and the ineffable glimmers of soft-spoken decency that tend to show through even in his most unsavory roles. Yet Travolta’s CV is distinguished less by its iconic performances than by its iconic characters — Tony Manero, Danny Zuko, Vincent Vega … even Chili Palmer and Edna Turnblad — whose names are almost as recognizable as Travolta’s own.

To illustrate, Travolta recalls the preproduction process for “Face/Off,” Woo’s 1997 body-swap action film in which he and co-star Nicolas Cage were essentially tasked with playing each another. “Nic is very stylized in his personality, there’s a voice and a cadence and a walk that’s easy to hold onto, which I could imitate very easily,” he remembers. But Cage had a steeper hill to climb.

“Nic said, ‘I can’t find you in any of these movies, I don’t know who you are. There’s just all these characters,’ ” Travolta says. “Eventually he said, ‘Tell me if I’m on to something, but I took a little bit of you in “Phenomenon,” and a little bit of “Look Who’s Talking,” and I think that’s basically who you are.’ I said, ‘Yeah, that’s pretty close. That’s accurate enough.’ But it was much easier for me than it was for him.”

Travolta uses the word “beingness” several times to describe his craft. It’s a word that is often associated with Travolta’s Scientology faith, though it has its roots in the philosophy of Martin Heidegger, for whom “everyone is the other, and no one is himself.”

“You know when the balloon has taken off,” he says of the research process. “There are no absolutes in the development of a character, but all I know is that until I can assume the beingness of that character quickly, and let go of it just as quickly, the character hasn’t arrived yet. When I can assume it and think in character, then I’m ready to shoot,” he says.

“It’s about finding a comfort zone. I guess I’m just more comfortable being other people than I am being myself.”