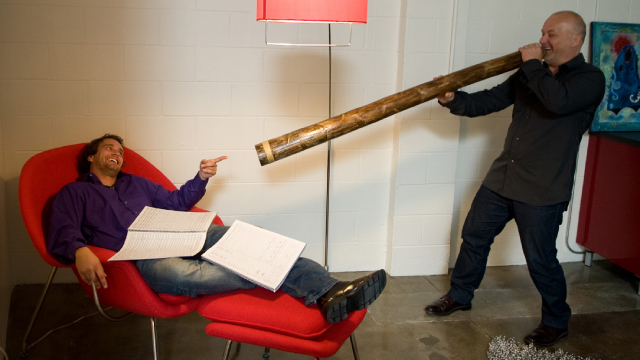 There’s almost a Catch-22 to creating trailer music: Make something that’s interesting enough to resonate with audiences but don’t make it so compelling that it overshadows the performances — or sound so similar to another work that fans experience the wrong kind of deja vu.

Judging by how in demand they are, Nick Phoenix and Thomas J. Bergersen seem to have navigated this tightrope quite nimbly.

With Two Steps From Hell, the L.A.-based music production company they founded in 2006, the duo’s music has made us worry about Walt and Pinkman’s safety in the season four trailer of “Breaking Bad,” root for Harry as he prepared to battle Voldemort in three of the “Harry Potter” films, and set us on a quest for a ring with “The Hobbit.” Their range is such that they’ve placed their stamp on countless upper-tier films, television shows and videogames.

Their aim is to create an indelible aural association with their clients’ entertainments.

“What we try to do is create a strong melody that people recognize and is instantly memorable,” says Bergersen. “That’s been our focus the whole way, to create something that’s really strong branding.”

The duo’s fanbase has grown beyond the cineplex. Their three albums of original music, “Invincible,” “Archangel” and “Skyworld,” are staples on iTunes’ Soundtracks, with “Invincible” heading toward Gold record status. Their YouTube channel has more than 22 million views.

And, on June 14 — in collaboration with music production studio Extreme Music, which exclusively licenses this music on their site — they will showcase their repertoire at Walt Disney Concert Hall, occupying a stage usually reserved for classical masters and jazz giants. If things go well, there are talks of taking the show on the road.

SEE ALSO: Lake Bell Finds Her Voice ‘In A World’ Dominated By Men

“Kind of the way our music pushes classical and film music into something a little more exciting,” says Phoenix, “the show will be doing the same thing.”