The writer-director-producer, known for his anarchic humor, is proud to be recognized as a filmmaker 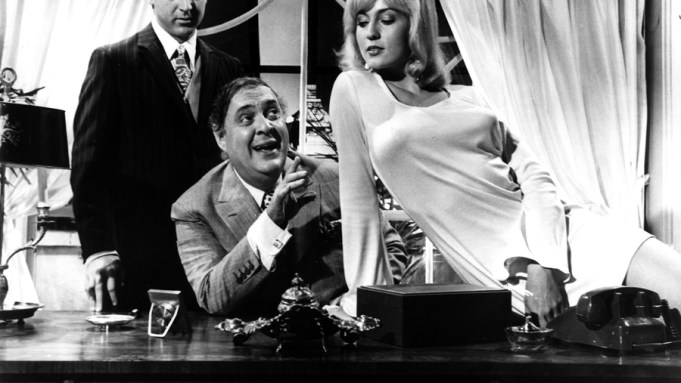 Mel Brooks has won an Oscar, an Emmy, a Grammy and his musical The Producers earned a record 12 Tonys. He worked with a team of writers on Your Show of Shows that was the equivalent of the 1927 Yankees. He considers Sid Caesar the “sharpest, most gifted” comedian who ever lived. And his “Young Frankenstein,” which helped pioneer the movie parody, might be the funniest film ever made, if not one of the most gorgeously crafted. We posed a few questions to the next recipient of the AFI Life Achievement Award. Here is an edited version of that exchange:

Were you surprised by the AFI honor?
It was gratitude. I’ve always been recognized as a comedy guy, either as a performer or a comedy writer, but never have I been saluted as a filmmaker. I thought I was finished with AFI because six or seven months ago they gave me a doctorate at a graduation ceremony. I was bitterly disappointed. I was wearing a stethoscope and came to the realization that I wasn’t actually a doctor.

You came of age as a film director when the so-called New Hollywood was at its zenith. How did you view all that was happening around you when you seemed to be in your own world?
I loved it. Nobody was really doing uninhibited, anarchic comedy, except Woody (Allen). Certainly no one was doing parody and satire. I had the field to myself. I didn’t want to compete with Arthur Penn and Bonnie and Clyde.

Was Brookfilms (Francis, The Elephant Man) a way of expressing your more serious side?
True and not true. When I did “Blazing Saddles” I was saying something very important — that black people and white people should love each other. At the end when Cleavon Little and Gene Wilder ride off into the sunset and get off their horses into a limo, it’s a great comment on the reality of movies and maybe on brotherly love.

In the period between Your Show of Shows and your first film, The Producers, you went through a period of depression that lasted a few years. What was the source of that?
It’s a very simple answer: It’s called “out of work.” If you’re jobless, you lose all your self-esteem and your spirit plunges into the cellar.

You have the energy of a young man. What is your secret?
I think I’m dodging death, and so I’m on my toes. I’m like one of those videogames: There’s always a guy running away from fire or a rattlesnake. I think I’m that guy.

Could you imagine The Producers on Broadway back when you were first startled by Ethel Merman in Anything Goes at age 9?
No, but it is kind of a dream come true, really. I wanted more than anything else in the world not to be a shipping clerk in the garment center but to be a musical comedy creator. It only took 60 years to get around to it.

What do you think is the biggest misconception about you?
My height. I’m about 2 inches taller than people think I am. But actually, I think the misconception is that I’m just a dispenser of vulgarity. But if you saw “Francis” or “The Elephant Man” or “Young Frankenstein” or “The Twelve Chairs” you’d see that there’s a lot of creativity and thought that went into what I do. I think fast but I write hard and long.

You learned to play drums early on; if you would have pursued a music career, what kind of music would you have played?
I think I would have been stuck in very early jazz. It would start from Louis Armstrong to Dizzy Gillespie and Charlie Parker and that’s where it ends. And the heart and soul of it would be swing.

What’s next? I know a musical version of Blazing Saddles was in the works.
I don’t know. I’m a very old man! I’d like to do a musical of “Blazing Saddles.” It’s almost a musical already. It wouldn’t be a lot of work. I’ve never done film noir (so) I might do a satire of film noir. Every line in it would be a cliche that you’ve heard before.