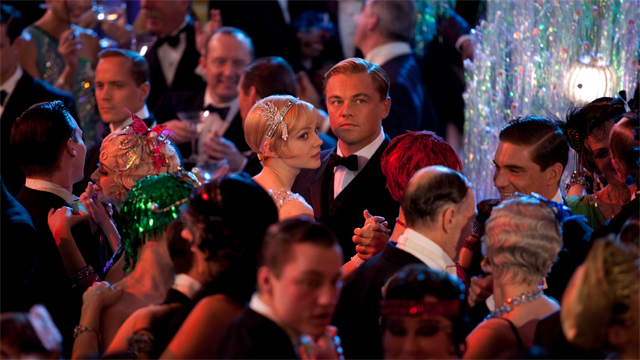 With “The Great Gatsby,” opening May 10, director Baz Luhrmann revisits the delirium of star-crossed romance evocative of his signature films “Romeo + Juliet” (1996) and “Moulin Rouge!” (2001). And like those movies, specifically “Moulin Rouge” — a mashup of contemporary pop and movie musical tunes in a period setting — “Gatsby” promises a heady brew of sounds that define Luhrmann’s at-times over-the-top aesthetic.

There are enough elements to fill a record store: Craig Armstrong’s original score as well as his arrangements for other artists featured in the soundtrack; music from Jay-Z that’s more than a mere guest-artist contribution; songs specifically written and performed for the movie by the likes of Florence + the Machine, Lana Del Rey and the xx; found period and current music from such artists as Beyonce, Andre 3000, Jack White, will.i.am and Louis Armstrong; reinterpreted Gershwin and Varese classics; and ’20s jazz recorded by the Bryan Ferry Orchestra.

If it all seems more tailored to a musical than a period drama based on the novel by F. Scott Fitzgerald, it’s the nature of a very musically minded filmmaker with an opera director’s ear.

“(Luhrmann) likes to have as much choice as possible,” says Armstrong, who also scored “Romeo + Juliet” and “Moulin Rouge!” “He’s an artist who likes a very large palette of sound.”

Based on the trailers, which initially featured rather tortured covers of U2’s “Love Is Blindness” (White) and the Turtles’ “Happy Together” (Filter), if there’s a through line to all of this it’s emotion with a capital E — the kind of emotion that’s worn on Gatsby’s sleeve, at least as played by Leonardo DiCaprio, as opposed the emotion held in check by Robert Redford in the 1974 version “Gatsby.”

The latest trailer features a cover of Amy Winehouse’s “Back to Black” by Beyonce and Andre 3000 that pulses with an impending sense of doom, and a melancholic “Young and Beautiful” by Del Rey that speaks to Gatsby’s sense of longing and the misbegotten notion that he can relive the past with the love of his life, Daisy Buchanan (Carey Mulligan).

“I think the music in the trailers is indicative of the broadness of styles that we’re applying in the film,” says music supervisor Anton Monsted, who acknowledges the expectations that come with translating a widely admired literary work to the screen, in 3D no less, in such an audacious manner.

“I think part of that interpretation for Baz is how the music can speak to people either to make them feel like they’re in a 1920s setting or help them feel the excitement the young people Fitzgerald writes about were feeling when they heard jazz, which was a forbidden music that their parents frowned upon just as parents frowned upon rock ’n’ roll in the ’50s.”

Luhrmann spoke to Jay-Z about using hip-hop the way Fitzgerald used jazz. “Fitzgerald coined the phrase ‘the Jazz Age’, and I think Baz wanted to make a very specific point for the audience to say if that was the Jazz Age then we are very much living in the hip-hop age.” Characters are distinguished by a musical theme, like a foxtrot for Daisy, or a New Orleans-style funeral march for Gatsby.

Even the novel’s emblematic green light at the end of the Buchanans’ dock in Long Island — which represents the romantic dream just beyond Gatsby’s reach — is given musical dimension.

“Baz was keen on trying to find a distinctive sound for the green light,” Armstrong says. He used a water phone and bowed vibraphone, which produces an “ethereal, kind of beautiful sound.”

All these seemingly disparate elements are held together by Armstrong’s underscore and arrangements, which extend themes introduced by various guest artists and vice versa. Ferry’s orchestra helps form this connective tissue. “The music re-echoes and re-examines themes that are set up in the score so that they’re in the same sonic universe,” says Monsted.

It’s important to note that each contribution, whether found or original, is tailor-made for the drama at hand. “As a general rule, everything that goes through Baz becomes customized,” says Paul Broucek, president in charge of music at Warner Bros. Pictures, which is distributing the film. He has the respect and the trust and the reputation that people let him do things I’ve never seen artists so willing to do. “He’ll hear, ‘here’s my multi-track session, here’s my Pro Tools session; here’s the stems….’ It’s not a remix, it’s repurposing; it’s custom-shaping it to work with the sonics of the film, to work with the emotional, dramatic tone in a particular scene.”

But there won’t be any cameos in the film like Kylie Minogue’s sprightly green fairy in “Moulin Rouge!” or Quindon Tarver’s showstopping version of Prince’s “When Doves Cry” in “Romeo + Juliet”.

That’s not to say Interscope, which is releasing both a 14-track standard soundtrack and a deluxe version that will feature three bonus tracks May 6, won’t be giving these artists special attention.

“While it is a collection that we feel will grab a hold of the audience on its own, we are drilling down as much as possible with each artist individually to reach their core fan,” says Anthony Seyler, VP film and TV marketing at Interscope Geffen A&M Records. “We are working with Florence’s team to speak to her audience in a way that is natural for both Florence and her fans. And that will be a very different method than we will use to expose the Fergie, Q-Tip and GoonRock track (“A Little Party Never Killed Nobody”), which is a summer dance record.”

Based on previous Luhrmann-driven soundtracks, both of which spawned sequels (“Moulin Rouge” went double platinum and “Romeo + Juliet” scored triple platinum in the U.S.), anticipation is high. And if this dizzying amount of music sounds like putting the cart before the horse in terms of the drama, it’s testament to Lurhmann’s tendency to treat the story and the music as one.

“I said to Baz: I’ve figured you out, you’re a frustrated record producer — well, not so frustrated, you’re doing it,” Broucek says. “And he sort of winked at me and said, ‘Ah yes, you have figured me out. And I’ve also figured out how to make some really great videos to go along with my records.’ ”