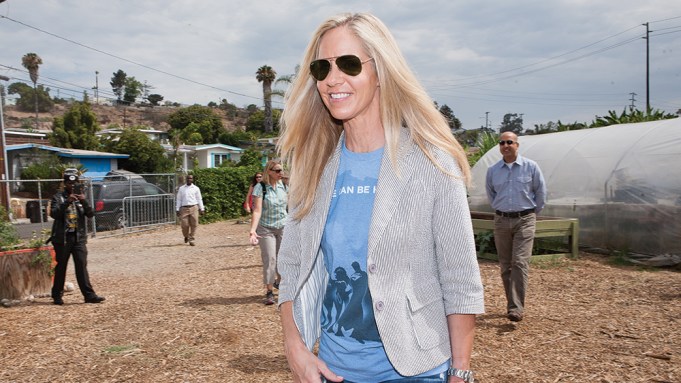 Building brand awareness is something with which Diane Nelson, named president of the newly formed DC Entertainment in 2009, is quite familiar, having managed Warner Bros.’ highly successful “Harry Potter” franchise. Now, as Nelson figures out how to get the core Justice League characters — Superman, Batman, Wonder Woman, the Flash, Aquaman, Green Lantern and Cyborg — onto the bigscreen, and how to grow their presence through comicbooks, toys, videogames and other spinoffs, she’s also raised the superheroes’ profiles by enlisting them to be the face of a good cause.

For two years, DC has turned to the Justice League to promote We Can Be Heroes, a campaign dedicated to raising awareness and funds for the hunger and drought crisis in the Horn of Africa. The effort has exceeded expectations, Nelson said, raising more than $2.3 million since early last year, primarily by auctioning off art, collectibles and experiences on crowdfunding site Indie–gogo, featuring the characters under the tagline: “Get something good. Do something great.” And in an eBay auction that ended July 27, a Kia Sorrento SUV created by West Coast Customs, featuring custom artwork by DC Comics co-publisher and comicbook artist Jim Lee, part of a series of Kia vehicles tied to the campaign, was sold.

“We knew from a DC point of view that these characters were our top priorities and top brands,” Nelson told Variety while promoting We Can Be Heroes at Comic-Con in San Diego. “(We saw) that the association of those characters with a cause like this would be good for the company and the brand. But equally, people all over the world would know these characters better than any others.”

When launching the effort, Nelson knew it would be difficult to encourage a demographic that normally doesn’t donate to charities — males 18-34 — to put down their comicbooks and open up their wallets for the organizations that DC and parent company Warner Bros. support with the campaign: Mercy Corps, Intl. Rescue Committee and Save the Children.

But enlisting the Justice League “is how we bring attention to the issue,” said Nelson, who believes keeping fans happy can also be good for others.

To Nelson, DC Entertainment and Warner Bros., corporate responsibility is a big component of the overall business model. But launching a philanthropic campaign can pose as many problems as launching a movie. DC had to find just the right cause and partners to fit the context of their brands and engage DC fans at the same time.

“We wanted to focus our energies behind a single philanthropic effort that allowed us to hit a critical mass of real support,” Nelson said.

The idea for We Can Be Heroes was born when a board member at Mercy Corps reminded Time Warner chief Jeff Bewkes that DC had created a comicbook in 1986 with sales supporting famine-relief efforts in Africa.

The timing of DC’s relaunch of not only the New 52 comicbooks — the 2011 relaunch of its entire line of superhero periodicals — but also the Justice League, proved a good fit for the We Can Be Heroes campaign.

After considering causes in the U.S., Nelson chose to revisit the plight in Africa because “our characters and company are global,” she said. “This was a perfect opportunity for us, but the more we learned about the situation on the ground there, we realized internally that it’s really urgent and really solvable.”

The goals at first seemed modest. The Batman-themed campaign on Indiegogo set a fundraising mark of $50,000, and raised $152,000. The Superman fundraiser nabbed $132,000, well above the $100,000 target. Those successes gave DC confidence to envision We Can Be Heroes as an adjustable template for bigger fundraising goals in the future.

We Can Be Heroes funnels money continuously to the three NGOs for acute-need hunger and drought projects as well as longer-term works that are sustainable by training local populations. It’s already helped fund mobile health and nutrition efforts in rural Ethiopia, health education, refugee relief, sanitation and water-delivery programs, like wells and pipelines.

Some of the DC and WB team at Comic-Con got to see first-hand one of the long-term projects that the campaign helps sustain when they visited the New Roots Farm in San Diego. The farm was launched by Somali refugees with help from the IRC in 2009, and now has 85 plots worked by not only Somalis but also refugees from Cambodia, Myanmar (formerly known as Burma) and some African nations. The farmers also sell their produce at market and to local restaurants.

Lauren Biller, manager of corporate partnerships at Save the Children, appreciated that the companies decision to target the chronic issue of hunger in Ethiopia, Kenya and Somalia. “Warner Bros. and DC took up an issue that’s not sexy and not in the news,” she said. “They took a risk with this issue that’s been going on so long.”

Added Jennifer Schmidt, director of corporate partnerships at Mercy Corps, “For our programs in Somalia, we really needed a hero. But you’d turn on the TV and see stuff other than this crisis. We needed someone to come in to help tell this story (of hunger in Africa) and break through the clutter.”
The key was to tie the issue to the popular characters.

At last month’s Comic-Con, DC and Kia introduced the eighth and final vehicle featuring the Justice League characters, which it auctioned off on eBay, generating $41,075 from 35 bids. The SUV has all of the seven-member League’s heroes painted along its sides — the stylized art drawn by Lee, with each seat in the seven-passenger vehicle dedicated to a particular crime fighter.

The other seven cars were also on display after touring more than 50 auto shows over the past 10 months, according to Scott McKee, Kia Motors America’s director of PR. “Everyone knows them, and everyone loves them.”

But the pairing of DC and Kia didn’t come without a few challenges, Lee noted. Chief among these was how to bring the Justice League to life through the vehicles. “When you think of the Justice League, you think of these seven iconic, very powerful characters,” he explained. “Each of them embody a very special virtue, whether it’s truth, justice, strength or equality.”

Ultimately, the campaign decided to focus on what it considered to be the League’s larger theme.

“The special message of the Justice League is what they can achieve when they come together,” Lee said. “The whole is very much greater than the sum of the parts. So when we look at something like this campaign and apply them to thinking about real-life crises like the Horn of Africa, you realize that it’s not enough for us to just step forward and be a hero. We actually have to band together. We have to work in unison with a determined effort to try to make a difference. That’s the only way we can make an impact.”