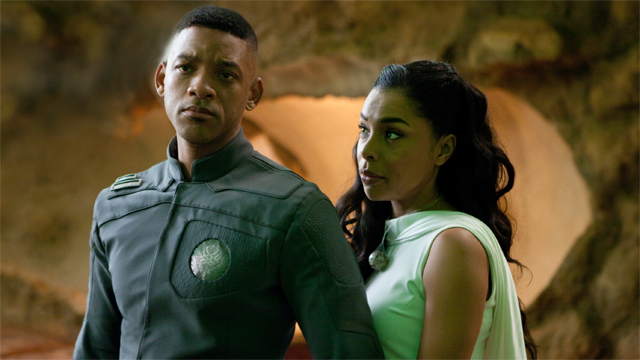 It seems M. Night Shyamalan just can’t catch a break nowadays at the box office — even with Will Smith on board.

The filmmaker’s first director-for-hire project, “After Earth,” which stars Smith and son Jaden, looks to earn between $35 million and $40 million in three days. Sony’s $100 million-plus film is expected to trail Universal’s “Fast and Furious 6,” which should win its second straight Stateside frame, with around $50 million.

“After Earth” originally was scheduled to bow next weekend, but Sony bumped it up a week to take advantage of a vacancy in the calendar.

Read Our Review of “After Earth”

While “After Earth” is expected to be the weekend’s top opener (ahead of Lionsgate’s magic thriller “Now You See Me,” tracking in the mid-to-high teens), the film faces an unexpected roadblock: “Fast and Furious” has been greatly overperforming since its opening last weekend.

Even with tough holdover competition, a $35 million-$40 million opening for “After Earth” would be one of the highest Stateside debuts for Shyamalan, rivaling “The Last Airbender,” which had a $40 million debut in 2010. But for Papa Smith, such an opening would be only so-so — and even for Jaden, whose only other summer release, 2010’s “The Karate Kid,” earned $55 million opening weekend.

Sony has been selling “After Earth” almost exclusively has a Smith vehicle, with hardly any reference to Shyamalan in the film’s marketing materials. The decision was made to capitalize on a more potent brand with the Smiths, especially overseas. “After Earth” opens day-and-date only in South Korea, with most other markets set to follow next weekend.

“After Earth,” which was written originally by Gary Whitta and then tweaked by Shyamalan, centers on a father and son (played by the Smiths) who crash land on Earth, which has evolved to kill humans.

The picture marks the first in this summer’s apocalyptic-themed glut that includes “Pacific Rim,” “World War Z,” “Elysium,” as well as comedies “This Is the End” and “The World’s End.” Universal’s Tom Cruise starrer “Oblivion,” which cost $120 million to produce and tens of millions of dollars to market, bowed in April and has grossed a disappointing $268 million worldwide. Pic bows in its final two markets, Japan and Venezuela, this weekend.

Despite having a budget of $75 million, Lionsgate has modest expectations for ensemble thriller “Now You See Me,” though the film could overperform in the low-$20 millions. “Now You See Me” stars Jesse Eisenberg, Mark Ruffalo, Woody Harrelson, Isla Fisher, Michael Caine and Morgan Freeman.

Aside from “Fast and Furious” and “Hangover,” the list of solid holdovers include Fox-DreamWorks Animation’s “Epic,” Paramount’s “Star Trek Into Darkness” and Warner’s “The Great Gatsby.”

At the specialty box office, CBS Films opens Sundance coming-of-age comedy “The Kings of Summer” at four locations, as does Fox Searchlight with its cult-themed thriller “The East.”