2013 Domestic Box Office to Reach Record (and Other Interesting Factoids)

China again drives overseas totals up 4%-5% over last year, according to early estimates 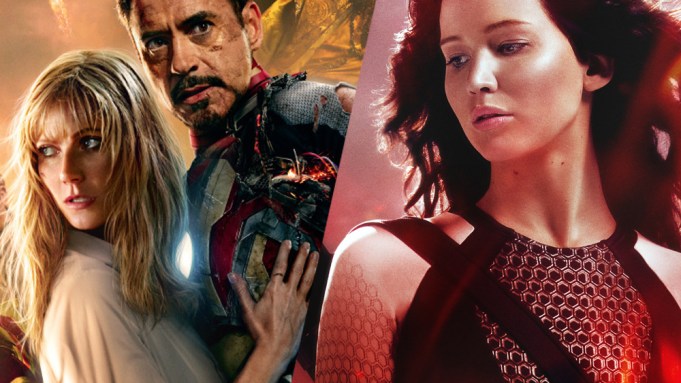 Write it down in the history books: 2013 was another record-setting year at the domestic box office.

Thanks to a robust Christmastime play period, which is estimated to be more than 10% up over last year, total B.O. is just $1.6 million behind the $10.837 billion record tally set in 2012, with two (three counting New Year’s day) days left to lift 2013 grosses even higher.

Meanwhile, early estimates show that international totals are between 4% and 5% higher than 2012, driven again by the booming Chinese box office.

So far, domestic B.O. has amassed $10.836 billion, with totals potentially reaching the $11 billion mark for the first time ever through Wednesday.

SEE ALSO: 2013 Was a Schizophrenic Year at the Box Office

Even as Lionsgate’s “The Hunger Games: Catching Fire” bulldozed through the fourth quarter, grossing more than $391 million domestically through Sunday, the Stateside B.O. crown still goes to Disney-Marvel’s “Iron Man 3,” which raked in almost $410 million. In fact, “Iron Man 3” so far stands as the only $1 billion global grosser this year when last year there were four. (“The Hobbit: The Desolation of Smaug” could reach those heights in 2014, however.)

Here are some other interesting highlights from the 2013 box office:

Looking ahead, the box office doesn’t appear to get any lighter during the summer, especially in 2015, when at least a dozen franchise and superhero pics already are slated to bow between May and August.

In 2014, the summer load is slightly less, with pics like “Spider-Man 2” and “Transformers: Age of Extinction” expected to dominate.