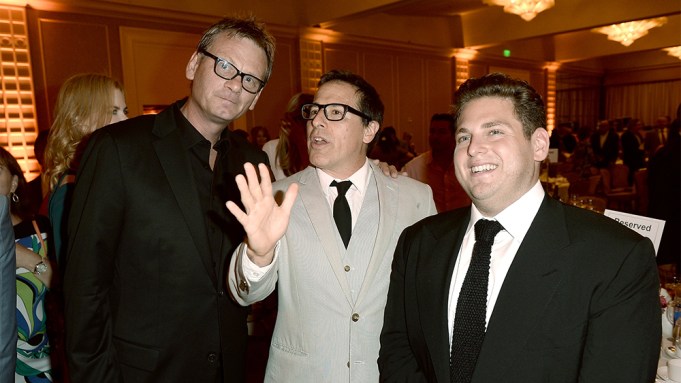 That old Hollywood warhorse, the awards TelePrompTer, leaped from the fringes of the Beverly Hilton to the center of conversation at the annual Hollywood Foreign Press Assn. installation luncheon.

The midday event, designed to officially commemorate the new set of officers for the Golden Globes org while also awarding a total of $1.6 million in scholarships and grants to 40 organizations, suffered through a low-key level of pro forma clumsiness in its speechmaking until presenter Vin Diesel finally acknowledged the struggles everyone was having with ye ol’ text scrolling machine.

In announcing a grant to the Sundance Institute, Diesel broke free from the TelePrompTer’s clutches to speak sincerely about his own entertainment industry beginnings, where he “was literally going from a bouncer job to being recognized as a filmmaker” and when, after his indie film “Strays” bowed at the Sundance Film Festival, a chance encounter on the street with Robert Redford left Diesel “speechless for two days.”

“I don’t get out much to see so many talented people,” Diesel said to the assembled at the Hilton’s Beverly Hills Ballroom. “So it’s a good day.”

“If anything’s been made clear to me today,” said Hill, “it’s that I don’t think a single actor in Hollywood can read.”

Joked Bateman: “I think the rehearsal’s going great — tonight’s going to be good.”

Perhaps appropriately, the most eloquent words came from a woman who eschewed speechmaking aids completely: 95-year-old “Johnny Got His Gun” actress Marsha Hunt, who joined Tab Hunter in presenting an HFPA grant to the Film Noir Foundation.

Other presenters at the luncheon included Nicole Kidman, Diane Kruger, Demian Bichir, David O. Russell, Vince Vaughn, Amber Heard, Liam Hemsworth, Blair Underwood, Julie Delpy, Dermot Mulroney and Olivia Wilde. The event was light on any overt awards-season campaigning, though there was plenty of time for schmoozing during the cocktail hour that preceded.

In lieu of gift bags, donations were made to Jeff Bridges’ No Kid Hungry.  Through the years, the HFPA has distributed over $18 million, handed out 925 scholarships and helped restore 82 films.

“It’s of course beautiful to restore films and to (work with) Martin Scorsese and the Film Foundation,” newly elected president Theo Kingma said, “but we also really like to give to the smaller ones, that don’t have the Golden Globes as a platform to raise money.”

Added Longoria: “I respect that the Hollywood Foreign Press uses the power of the pen to bring awareness and raise funds for all of these worthy causes, and that’s a big responsibility that everyone should take seriously.

The most recent elections for the HFPA took place in June. The HFPA is led by Kingma, vice president Lorenzo Soria, exec secretary Lilly Lui and treasurer Meher Tatna.

Allegra Tepper contributed to this report.