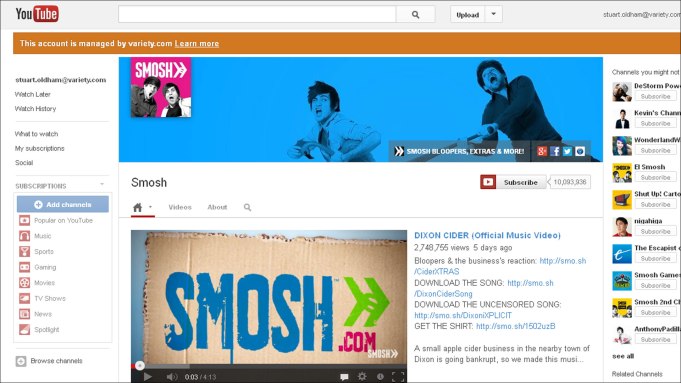 Smosh could be making the move to TV.

Alloy Digital, the company behind the top-ranked YouTube channel, is in talks with multiple cable networks about finding a second home for the talent across Smosh’s five channels, according to sources. Negotiations are focused on both scripted and non-scripted fare; Alloy is already signing up writers to support the expansion.

A TV deal would another feather in the cap for Smosh, which is led by comedy duo Anthony Padilla and Ian Hecox. The channel recently crossed the 10 million subscriber mark, making it the single most subscribed channel on YouTube.

Migrating YouTube-bred intellectual property to TV isn’t a new trend, going back to the successful transition of teen star Lucas Cruikshank, a.k.a. Fred from YouTube to Nickelodeon. More recently, animated breakout the Annoying Orange expanded to Cartoon Network, and Ray William Johnson of “=3” nabbed a script deal at FX.

It’s not an entirely unexpected move given the executives at Smosh parent company Alloy Digital have deep TV backgrounds: Jordan Levin, Alloy Digital president and CEO of its subsidiary, used to be president of the WB while Generate Studios president Pete Aronson formerly led Regency Television. Smosh is led by president Barry Blumberg, executive VP of digital at Alloy Digital.

The talks also extend to drawing from Smosh channel extensions Smosh Games and Shut Up! Cartoons. Smosh got its start on YouTube in 2005.