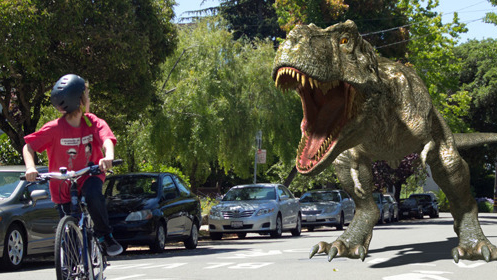 Famed creature maker Phil Tippett and his newly remonikered shingle Tippett FX aren’t waiting for the visual effects business in California to recover. Instead, the company has moved into the consumer space — a major departure for such an important visual effects studio.

Tippett has launched the One Stop Creature Shop, which supplies animated creatures consumers can put into their own videos using the Efexio app from Pixelux Entertainment.  An Efexio commercial, with screen credit for Tippett, is running ahead of  monsters-vs.-robots feature “Pacific Rim” this weekend.

“It’s a way for us to utilize the talents that we have and rebrand a little bit,” said Tippett FX co-owner Jules Roman. “It’s using the talent we have and putting it into the market place with a different revenue model, a very direct revenue model. And obviously we’re looking for other things to do rather sit around and moan about the state of the visual-effects industry. Which we still do sometimes, because it’s fun.”

The One Stop Creature Shop offers 12- to 15-second clips of animated creatures such as dinosaurs, zombies, robots and aliens that users can insert into their own video. Consumers can’t change the performance of the animated creatures, but creatures can be made larger or smaller, moved forward or backward in space to fit in the video, and can be lit to match the scene. That sets the Tippett/Efexio offering apart from similar apps, Roman said.

Efexio is available for iOS, Mac and Windows PC devices. It is a free download and comes with one free effect. Animations cost from $0.99 to $1.99. The pro versions of Efexio, which can output video in HD, is priced at $4.99 and $9.99. Efexio plans to release a new effect each month.

There have long been predictions that eventually visual effects and animation companies would eventually thrive shift from creating content to selling tools so consumers can make their own content — just as Kodak initially thrived by supplying the public with the ability to take snapshots, rather than having to go into a photo studio for portraits. But such products from vfx and animation companies have been slow to appear so far.

Corey Rosen, Tippett’s head of creative marketing, added: “We’re looking at the things we create in a different way than we do when we’re working for a big studio or a big movie, where we’re focused on the shot or the creature. This is a totally inverse model. We’re creating performances and looking out and saying ‘OK, what are you going to do with the stuff that we make, rather than making stuff for you to consumer.”

Tippett himself, famous for such classic f/x as the Imperial Walkers in “The Empire Strikes Back” and the dinosaurs in “Jurassic Park,” has taken a hand in creating the Creature Shop animations.

“Nothing has been lifted from movies,” Roman said. “It’s all unique things that we created and own and therefore are licensing to Efexio. We are creating a YouTube community channel and hope to be hosting little competitions, and hoping to get people to upload their movies and give us feedback so we can decide what the next thing to do is in terms of making more animations for them. If robots are the thing, we’ll make more robots.”

Tippett FX posted a fake trailer on YouTube, in the style of classic creature features, to show how the Efexio app can be used. Tippett FX, which is in the midst of changing its name from Tippett Studio, recently downsized as the “Twilight” franchise wrapped and vfx work has become scarcer for U.S.-based companies.

Tippett’s talks with Pixelux began when a Tippett researcher met the owner of Pixelux at the Siggraph computer graphics conference. Pixelux makes software commonly used in feature vfx production, but it had no content for Efexio. “We just realized ‘Oh my God, this is an amazing opportunity.’ Also it seemed different from anything in the marketplace. So we thought let’s just jump in and do this. And we’ll just see.”