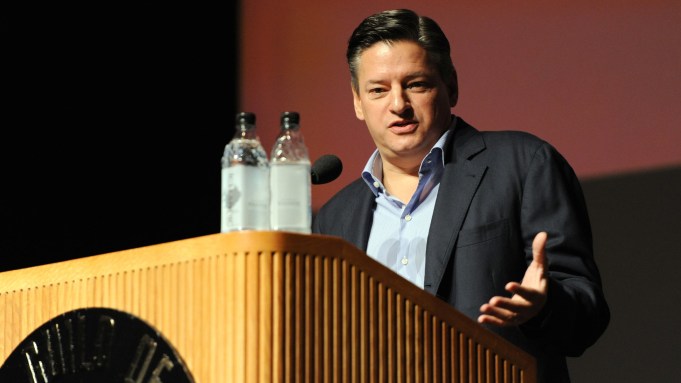 Netflix chief content officer Ted Sarandos launched a blistering attack on theater owners for stifling innovation, warning in a speech Saturday that they “might kill movies.”

What’s more, the exec called on the owners to allow big movies to open via Netflix day and date with their release in theaters, in his keynote (see full video here, and above) at the Film Independent Forum in Los Angeles.

“Theater owners stifle this kind of innovation at every turn,” he said. “The reason why we may enter this space and try to release some big movies ourselves this way, is because I’m concerned that as theater owners try to strangle innovation and distribution, not only are they going to kill theaters–they might kill movies.”

Sarandos was alluding to exhibitors’ resistance in previous years to any digital release of movies that would impinge on their own windows, as when Universal nearly changed the traditional distribution strategy for the 2011 movie “Tower Heist,” only to back down after considerable pressure. Studios have since largely disavowed premium VOD, though smaller independent films have been released day-and-date with increasing frequency in recent years.

But he stopped short of criticizing the studios. “I don’t blame the studios for what they’re doing and I don’t fault them, because the studios are always trying to innovate,” he said.

Sarandos turned to statistics from this summer’s box office, pointing out that though more movies with a budget of more than $75 million were released this summer than any summer before, theaters saw only a six percent lift in attendance.

Just days after indicating on Netflix’s third-quarter earnings call his interest in getting into the movie Sarandos went a step further today when he suggested releasing “big movies” on Netflix the same day they appear in theaters.

“Why not premiere movies on Netflix the same day they’re opening in theaters? And not little movies. There’s a lot of people and a lot of ways to do that. But why not big movies?”

“Why not follow with the consumer’s desire to watch things when they want, instead of spending tens of millions of dollars to advertise to people who may not live near a theater, and then make them wait for four or five months before they can even see it?” he added. “They’re probably going to forget.”

This comes after Monday’s third quarter earning’s call, where Sarandos, seeing the success of original series like “House of Cards” and “Orange is the New Black,” said Netflix expects to double its original programming spending in 2014 and include original movies. Though he couldn’t quantify how much original series helped boost business, he said “it definitely helped.” Netflix currently has more than 31.1 million customers.

Sarandos also hinted plans at a third season of “House of Cards,” which is currently in its last week of shooting season two.