Warner, Prime Focus and Imax team up to show Oz as it's never been seen before 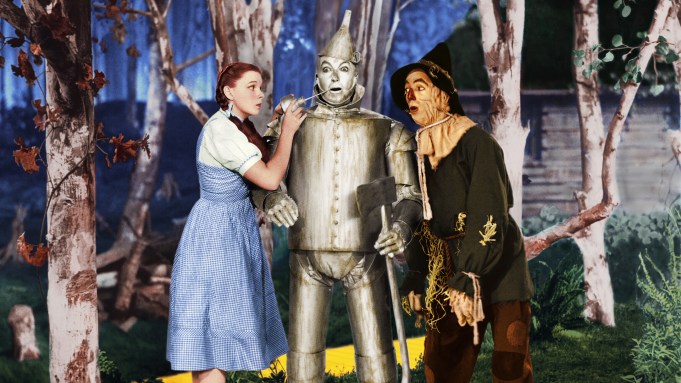 “When I first heard that this was being done, I wasn’t excited, I was frightened,” said George Feltenstein, senior VP of theatrical catalog marketing for Warner Bros. Digital Distribution, says of the Imax 3D conversion of “The Wizard of Oz.”

“I thought, you’re taking a national treasure, and can you do it justice?”

But at the end of the process, audiences will not only view “The Wizard of Oz” in 3D for the first time but they’ll be shown details even the pic’s most devoted fans have never seen before, thanks to a collaboration between Warner Bros., Prime Focus and Imax.

Warner Bros. Motion Picture Imaging went back to the original 3-strip Technicolor negatives to do both photochemical and digital restoration. That Technicolor process used three black-and-white negatives, one for blue, one for green and one for red. Then those three records would be printed onto a single strip of release film, in a process that was more like printing a book than a photographic print.

The picture had been remastered from different prints for each of its seven previous homevideo releases, but there had never been a digital restoration that used the original negatives.

As it turned out, the camera negatives were safely in a vault at the George Eastman House and in fine condition. However after 70 years they’d shrunk and no longer aligned properly. So after they were scanned, they were digitally altered to align again.

The digitally restored scenes reveal more detail than audiences saw in 1939, because the negatives couldn’t be perfectly aligned for printing in that era. Also the dye-transfer prints of the time, while famous for their rich, luminous color, were also a bit soft.

“The photochemical restoration had been done before on this feature, I think it was 1987,” was not entirely successful,” said Ned Price, chief preservation officer for Warner Bros. Technical Operations. “Because the three-strip Technicolor process was not meant to create a color negative. So when we made a color negative we had cross-color contamination.”

That problem was solved when the picture was put through a modern digital intermediate process, where the color was corrected and even set to match the look of a a dye-transfer print — but sharper.

After the film was restored, it was turned over to Prime Focus for 3D conversion. It’s the oldest picture ever converted to stereoscopic and the process took  16 months — far longer than the time spent to convert most features.

Warner’s Price oversaw the conversion, and he says one of the more difficult challenges was simply deciding what the 3D should look like. How much depth should there be? What, if anything, should seem to be in front of the screen?

“You’ve got executives who typically say ‘Give me 3D. I want more 3D, I want more 3D.’ And then it wasn’t right for the feature,” says Price. “The feature has a lot of depth to it, but we didn’t want to make the 3D the first thing you notice about the film.”

They considered keeping the black-and-white scenes in Kansas flat and going to 3D when the action shifts to Oz. “We thought it’s natural: Start flat and open it up. But strangely enough it didn’t look that good.” So Kansas does have some 3D depth, though Oz has much more.

Price says his own tastes are “conservative” and as a result, the resulting 3D is easy to watch and “unobtrusive.”

“I don’t like 3D unless it’s really good 3D,” he says. “So I was probably a good pick to rein in the people we worked with. They’re very good people over at Prime Focus but I think I kept them honest.”

While the Witch’s Flying Monkeys seem like a natural for “3D moments,” in fact they mostly fly side-to-side, says Price. Instead, it’s the Witch herself who pops in 3D.

Once restoration and 3D conversion were complete, the picture was handed over to Imax for additional sharpening and de-graining so it wouldn’t look fuzzy and noisy on a giant screen.

“We really lucked out,” said Lorne Orleans, senior VP of film production for Imax. “Our latest generation of tool, which was in Beta a few months ago, allows us to extract a lot more detail out of information that we’re given.” The latest Imax “DMR” tools scan several frames at once to gather information. This kind of “temporal imaging” reveals more detail than any single frame can.

“It gives us, if we want it, a completely noise-free version of a film, with all the details brought back.” So audiences will see the burlap texture on the Scarecrow’s face, Dorothy’s freckles and other tiny details that were invisible when soft prints were transferred to video.

Even Feltenstein is enthusiastic about the result.

“I went from being skeptical to being amazed when I saw a test screening, and (wondering) ‘How did they do it?’”

The theatrical release will run only a week, starting Sept. 20, but on Oct. 1 Warner Home Video will release a 5-disc 75th Anniversary edition of “The Wizard of Oz” including 2D and 3D Blu-ray, DVD and Ultraviolet versions, as well as documentaries and other bonus features.