Studio stays competitive among highest trending videos including "What Does the Fox Say?" 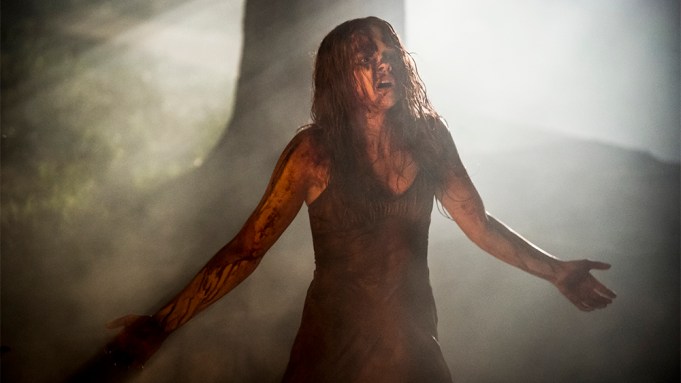 Kimberly Peirce’s adaptation of Stephen King’s horror classic “Carrie” may have tanked at the box office, but the film’s promotional campaign proved to be a viral hit. A web ad for the movie cracked YouTube’s year-end list of trending videos, which was issued Wednesday.

With almost 51 million views, the elaborate promotional prank dubbed the “Telekinetic Coffee Shop Surprise” is No. 8 on the top 10 list. In the clip, unsuspecting customers at a New York City coffee shop witness the epitome of a teen meltdown when a girl unleashes her “telekinetic powers” on someone who accidentally spills her coffee. Unbeknownst to the crowd, the perpetrator and victim are both actors.

Upon its release in October, Sony’s savvy promotional piece received over 4 million hits in a single day. A viral campaign can not only generate buzz, but draw audiences to films. Tens of thousands of commenters took to YouTube to express newfound interest in the Julianne Moore and Chloë Grace Moretz-starrer after watching the vid.

Thinkmodo — the agency behind the video — also created the viral hits iPad Head Girl, the Shaving Helmet and the Times Square TV Hack.

This year’s list also demonstrates YouTube’s pivotal role in online advertising. Jean-Claude Van Damme’s Volvo commercial featuring the split seen around the world and Evian’s water ad with the return of the dancing babies also appear in top 10, pointing to a future with ads that fit in more with YouTube content than TV commercials.

But to understand the list’s overall trend, one must listen to what the fox says: YouTube is a breeding ground for comic talent.

Two other comedy clips that cracked the top 10 come from users whose channels on the Google-owned site, Bad Lip Reading and Epic Rap Battles of History, have gained a steady following over the last few years.

The second “trendiest” video (95 million hits) — the original army edition of the “Harlem Shake” — was uploaded by another Norwegian, Kenneth Håkonsen, who usually posts vids of himself playing piano tunes. The comedy re-imagining of the popular dance craze ignited an online phenomenon. Thousands of versions of the 30-second meme hit YouTube earlier this year.

MisterEpicMann’s “How Animals Eat Their Food” and Steve Kardynal’s Chatroulette parody of Miley Cyrus’ “Wrecking Ball” (YouTube’s second most viewed video) came in third and fourth, respectively. Both have helped usher in a new era of the YouTube personality.

In addition to sharing its list of the highest trending videos, YouTube also shared its list of most viewed videos, which is dominated by music vids. Trending videos aren’t just defined by views, but a combination of various other criteria, including shares, responses and user comments.

South Korean sensation Psy had the most viewed video (599 million views) for the second year in a row, with “Gentleman.” Unsurprisingly, Miley Cyrus’ “Wrecking Ball” and “We Can’t Stop” were the second and third most watched, respectively, while Katy Perry’s “Roar” and Pink’s “Just Give Me A Reason” rounded out the top five.