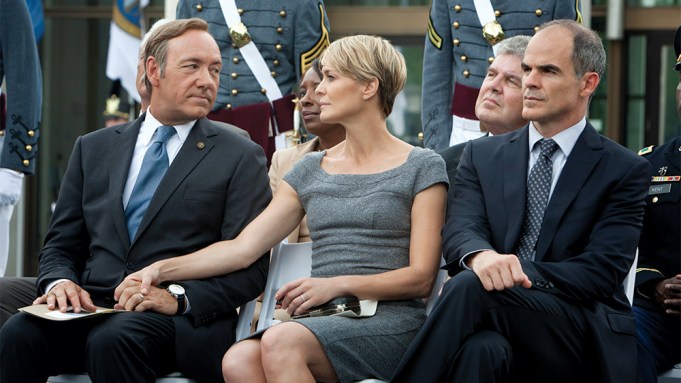 Netflix isn’t so different from traditional TV networks after all.

In its third-quarter earnings announcement Monday, the streaming service announced a significant shift in its accounting practices regarding original programming that will see it accelerate spending on series like “House of Cards.”

“Now we have more specific viewing data for original content which shows more viewing in the early months of a show’s debut, so we are accelerating the amortization of such content commensurately,” wrote Reed Hastings in his letter to investors. “We’ll continue to monitor the viewing patterns and adjust the amortization schedule as appropriate.”

Netflix telegraphed the move in an investor letter during the previous quarter.  “We are in the early stages of original content, and continue to monitor whether the viewing pattern is higher than initially expected in the first few months to suggest that we amortize at a faster initial rate,” the disclosure read.

Barton Crockett, an analyst with Lazard Capital Markets, had speculated back in August that an adjustment in its payment plan would lower its estimated earnings per share in the near term — a crucial metric that could affect the Netflix stock price.

While networks typically pay studios the bulk of the license fee for a series over its first year on the air because of advertising revenues, Netflix adheres to “straight-line” accounting for its original programming expenses, prorating dollars over the life of the license fee. That doesn’t change the total cost, but the scheduling of the spending changes dramatically.

Pushing spending up earlier than expected could put additional pressure on Netflix to grow internationally in order to generate the revenues that will allow it to afford original programming.

With the accounting change, Netflix pulled forward about $27 million in expense for the third quarter of 2013 from future quarters. However, the company said that the effect of the faster amortization of original content is small enough that it is not changing domestic contribution margin targets or global profitability targets.

Also on the original programming front, Netflix said that “Orange is the New Black” is its most watched original series yet, and though the company did not release metrics, suggested its viewing levels were “comparable to successful TV shows.”

The investor letter also indicated Netflix will double its original programming spend in 2014; its 2013 spend has been estimated at $150 million, according to analyst reports.

Netflix also released a highlight reel of its original programming to date (see clip above).