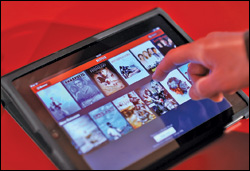 As if Netflix wasn’t already smart about recommending movies and TV shows, a new integration with Facebook announced Tuesday will make the streaming service even more proficient at delivering on a key product attribute: content discovery. More details on the arrangement are on the Netflix blog.

In a long-anticipated move that required lobbying on Capitol Hill to reach fruition, Netflix now allows U.S. subscribers to connect to other friends on the service to see what they’re watching. The ability leverages a notion that is gospel at Facebook: there’s no more powerful inducement of a consumer’s behavior than a glimpse of what his or her friends are doing. It’s certainly less expensive–and more targeted–than a 30-second TV spot.

Netflix has already been plenty savvy about delivering viewing recommendations via algorithms that surfaces the right content in front of the right subscriber based on data like their previous behavior cross-indexed with that of other users’ viewing patterns and recommendations. Facebook adds a new layer to this skill set that could deepen subscriber engagement with the platform–something Netflix is going to need to do to meet its ambitious growth goals.

Having to see federal law overturned in the death of the Video Privacy Protection Act should give some idea of how important Netflix sees the Facebook integration for its business (and, yes, users have the ability to hide that show they don’t want their friends to see). This isn’t just some new bell-and-whistle addition to the service, but a truly transformative move that could leverage the social network to redefine our understanding of the Netflix user experience.