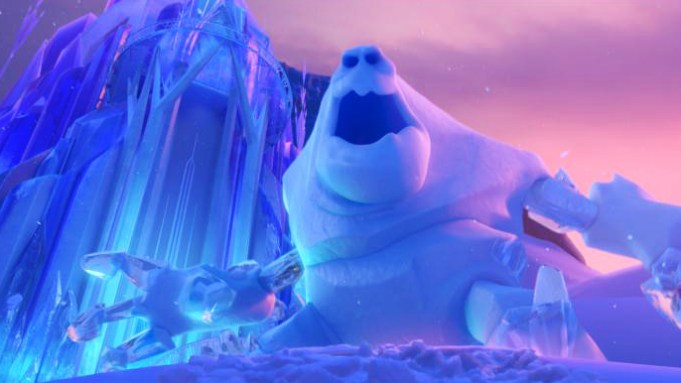 The Mouse House has released an app for Walt Disney Studios’ animated “Frozen,” on Apple’s iTunes, that enables young readers to explore the story told in the upcoming toon before it’s released on Nov. 27 (it opens early on Nov. 22 at Disney’s El Capitan Theater in Hollywood).

In “Frozen,” Princess Anna (voiced by Kristen Bell) goes on an epic journey with rugged mountain man Kristoff (Jonathan Groff) and his loyal reindeer, Sven, to find her younger sister Elsa (Idina Menzel), whose icy powers have trapped the kingdom of Arendelle in eternal winter.

The “Frozen Storybook Deluxe” app lets users interact with the story from the perspectives of the two sisters, depending on how they flip their iPad or iPhone. The app also features original music composed for the project.

The app is Disney’s third interactive storybook, developed with Disney Publishing, after producing ones for Pixar’s “Monsters University” and Disney’s “Planes.”

In both instances, the apps gave audiences a detailed look at the films before their release. The “Monsters University” Storybook Deluxe app was released more than a month before the sequel’s debut in theaters.

Disney Publishing calls the release of the apps a “new normal” for the company, especially as it looks to introduce new characters and potential franchises to audiences before the films’ openings. “Frozen” will introduce Disney’s 12th princess, with Anna to become integrated into its popular Disney Princesses brand of consumer products and experiences and theme park attractions.

“This particular film-based app is not a mere regurgitation of movie content, but rather an interactive story from the perspective of two new characters and their journey together,” said Lyle Underkoffler, VP of digital media for Disney Publishing. “Complete with activities, an original music score and film clips, we hope this interactive storytelling experience serves as a unique and immersive extension to the feature film release.”

As with the other apps, the interactive “Frozen” storybook is designed for kids, with beginning readers able to read on their own, record their voices or listen to narrated text.

App also features “frosty” drawing tools and other games like one to create snow globes and solve puzzles. Naturally, the software also includes clips from the toon itself.