'Batman: Arkham Origins,' 'Injustice: Gods Among Us' get choose-your-own-adventure books from Madefire 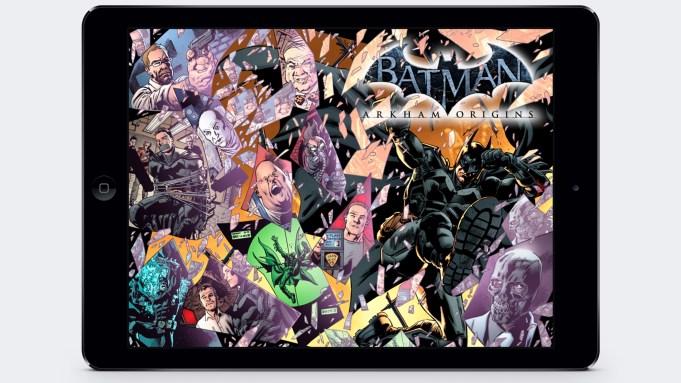 Gameification is coming to comic books.

DC Entertainment and digital studio Madefire have started producing a series of interactive graphic novels that offer choose-your-own-adventure type elements, starting with a spin off of the hit “Batman: Arkham Origins” video game.

Through an app for Apple devices, “Batman: Arkham Origins – A DC2 Multiverse Graphic Novel” will serve as a prequel to the story told in the game that’s enhanced with sounds, a soundtrack and moving artwork. New digital series will revolve around Bruce Wayne and how he comes Batman, builds the Batmobile, the Batcave and tries out different weapons and tools to fight crime.

The digital comic based on the game “Injustice: Gods Among Us” has also been remastered by Madefire to include new motion and sound elements. New installments of the comic book will be released in January, written by Tom Taylor.

Release of the new book will be broken up into eight chapters available for individual purchase or as an entire series, with each installment out every two weeks.

Design of the book is meant to offer up dozens of plot scenarios.

The app is meant to take “advantage of the interactive elements of the device,” says to Hank Kanalz, senior VP of Vertigo and integrated publishing for DC Entertainment. “This is all touch screen. You control the pace of how you read it.”

Readers who complete the series will be rewarded with two exclusive skins for the “Batman: Arkham Origins” game, including the new 52 Metallic Batman and Injustice Batman. Those who purchase a series pass will automatically receive the skins.

The focus on interactive comic books based on video games is meant to “keep the games fresh and players engaged” by “filling out the back stories of the games,” Kanalz said. “The game doesn’t have the bandwidth to explain everything.”

As a result, they also serve as a unique way to promote comic books to the gaming community.

“We have supercomputers in our pockets; we should expect more than just scanned in print,” said Madefire CEO Ben Wolstenholme.